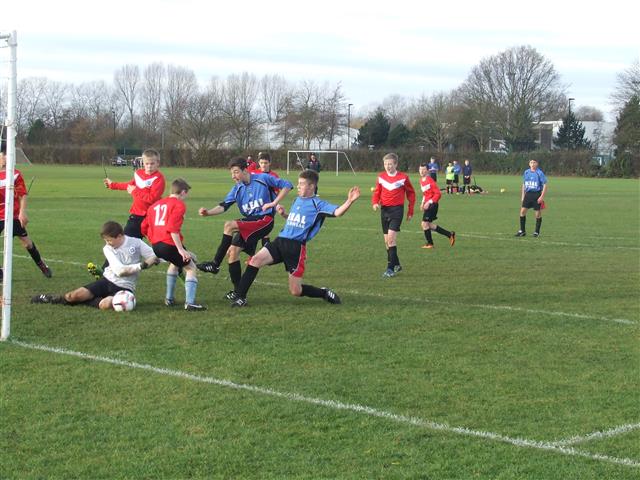 York Schoolboy’s U14’s head into the Christmas break with a 3 match unbeaten league run, after a 5-2 home win over a resolute Scarborough side.

York started brightly with early pressure bringing a Zac Lawrence shot, and with Owen Marshall and Will Mouncher keeping a tight reign in midfield it wasn’t long before York went 1-0 up with Max Tweddle cut in from the right and unleashed a 22 yard drive into the net. York continued to create chances with another Lawrence shot and a Davison flick cleared off the line after good work from Charlie Marshall. Any Scarborough attacks were quickly smothered out by timely interventions by York Centre backs, Barber and Kilvington. Eddie Greenhill headed over just before half time to leave the score at 1-0.

York again started the 2nd half on top and they hit Scarborough with 3 quick goals, the 1st when Man of the Match Joe Kilvington intercepted the ball, and ran onto hit a measured 25 yard shot into the roof of the net. York were then grateful to ‘keeper Adam Precious who finger tipped a free kick onto the bar and shortly after York made it 3-0 when Alex McMillan ran into the box and slotted past the advancing ‘keeper. The 4th goal came when Joe Kemp surged into the box to blast the ball in off the post. Rogerson  and a Hindle header then drew save’s out of the visiting ‘keeper, before it was Scarborough’s turn to hit York with 2 quick goals. York however had the last word when a Lucas Hindle shot made it 5. York therefore remain unbeaten in the league and hope to continue the run when the league season re-starts in January at Spen Valley.