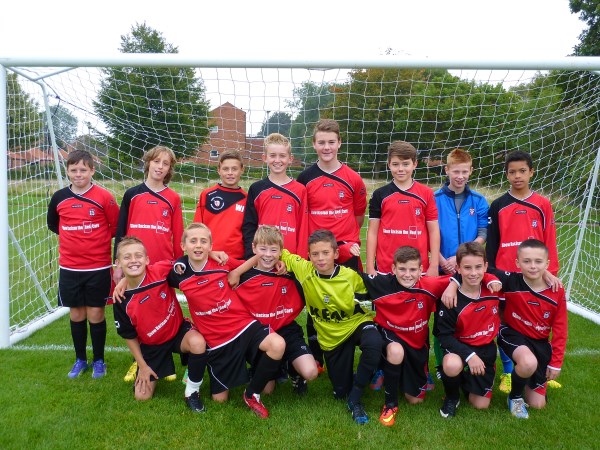 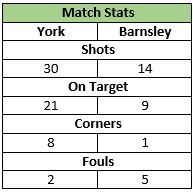 York U12 Schoolboys started their season with a scintillating home friendly against Barnsley, a match that York dominated for long spells of the game.

In the first minute York managed to two shots on target and had two corners, with Josh Hall’s devastating runs down the right wing creating an opening for himself and feeding Will Jarvis; but the Barnsley keeper was up to the task saving both shots well and the Barnsley defence were quick to clear their lines from the two corners. With Alex Kemp and Luke Jones in central midfield linking up well with wingers Declan Racher and Josh Hall, their devastating runs created more chances for York and it seemed only a matter of time before York would open the scoring.

With the back three of Simeon Hopkinson, Alfie Evans and Liam White keeping a solid line, any Barnsley counter attack was quickly and efficiently dealt with.  It wasn’t until the seventh minute that Nathan Storr was called into action saving well from the Barnsley attack to keep the score at 0-0.

Whilst York continued to search for the opening goal a Barnsley counter attack saw the Barnsley forward on a run down the left where he eluded the York Defence and calmly slotted in at the near post making it 0-1 after 12 minutes.

York continued to search for the equaliser, but the Barnsley keeper and defence were resolute saving and last gasp blocking shots from Josh Hall, Alex Kemp and Will Jarvis. In the 18th Will Jarvis fired York level from a pin point cross from Declan Racher after a great run down the left wing making the score 1-1 at the end of the first period.

York made some changes for the second period which saw Adam Hunter and Harvey Stephenson make their debut for York schoolboys. York started the period in the ascendancy with Elliot Oliver and Harvey Stephenson dominating midfield and providing the foundation for York to mount their attacks and it was Will Jarvis this time turning provider for Josh Hall to drill the ball just inside the left post to put York 2-1 up in the 24th minute.

York continued to press for more goals but the Barnsley defence and keeper were steadfast and well drilled denying York on numerous occasions.  With seven minutes left in the second period the Barnsley attacker lost his marker and put Barnsley level against the run of play making it 2-2.  In the dying seconds of the period Luke Jones was unlucky to see his 30 yard free kick skim the top of the crossbar and again the teams went in level at the break.

The third period saw Barnsley more dominant, forcing saves from the debutant Adam Hunter, with Tom Eaton and Bankole Claudius-Cole standing strong against more Barnsley attacks. But Barnsley were up for taking their chances and took the lead with a well taken goal making the score 2-3.  As York pressed for another equaliser a counter attack from Barnsley in the dying minutes of the game saw the Barnsley forward head in past the York keeper after a shot rebounded of the cross bar to make the final score 2-4.

Managers Comments (Matt Gore): We dominated possession and we certainly created the better chances. We had 21 shots on target versus their 9 shots. The main differences on the day was their keeper who was in fine form and their physicality. They came to rough us up and they were successful. At one point we had 4 of our starters off through injury. If we had taken our chances we would have been out of sight. The match stats tell their own story. We made a couple of errors and they capitalised. It was only a friendly and it’s still our pre-season. We will certainly be ready for the league games. Harvey and Adam both did well on their debuts. Harvey deserved his Man of the Match.