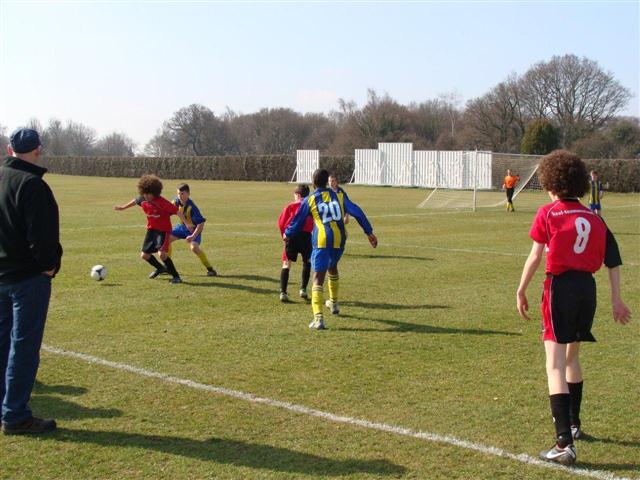 This was the first outing of the season for the selected squad following two very competitive trials, and the players looked eager to prove their selection was justified by going in front within five minutes following a flowing move from midfield allowing Rob Guilfoyle to round the keeper and score from a tight angle.

The second came shortly after a fine run by Charlie Ward to square the ball to Charlie Buckle to fire in from just inside the area. The third goal came from a corner which was initially cleared by Barnsley only for Jamie Higginbotham to fire in a cross which was turned in by Joe Crosby.

York continued to press and following fine work by Rob Guilfoyle down the right, crossing to the far post for Joe Hickey to head in at the far post to make it 4-0.

Further pressure by York then caused a mistake by the Barnsley keeper allowing Joe Hickey to score his second goal of the game. York’s next goal came from a Barnsley clearance which fell to Manni De Nobriga on the edge of the box who calmly side footed into the corner of the net.

Barnsley then had a spell of pressure but the York defence of Higginbotham, Wilson, Smith and Hutton stood firm with keeper Pat Randall showing confident handling.

After a period of Barnsley pressure York broke quickly with Manni De Nobriga feeding Lucas Frankish who crossed for Crosby to tuck away his second.

York started to press forward again and the next goal was not long in coming, good work from Charlie Jebson King set up Dom Jackson who’s shot rattled the bar, the rebound was collected by Danny Allinson who fired the ball into the top corner from 20 yards.

York had time for one final goal with good work down the right with Lucas Frankish releasing Joe Crosby to chip the keeper to complete his hat-trick and complete a resounding 9 – 0 victory.

This was a good all round performance and will give the squad confidence going forward for the rest of the season but more challenging games are to come.

Man of the match today is shared between Rob Guilfoyle and Manni De Nobriga.