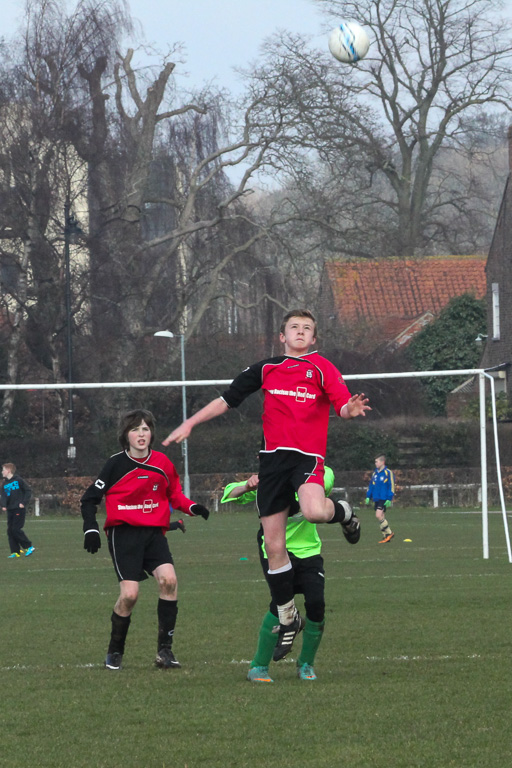 York U14s lost to East Riding 6-3 in their first league game of the season.

York got off to the best possible start. In early stages of match and after 6mins an inswinging corner from Dan Moll set up Jack Leeming to head home, putting the home team into the lead 1 -0.

York were enjoying a good spell and East Riding had not yet started. 12 mins in, after a York free kick was awarded, the opposition goalkeeper saved but sooner after it was Jack Atkinson who slotted in for 2-0. York were now cruising and if it wasn’t for missed chances could have been 4-0 up at half time.

East Riding fought back and on 25mins scored and then equalised from a corner 2 mins later.  Right on half time they pressed again and made it 2-3 going into the break. All goals came from the left hand side of midfield and the opposition, Hull Academy, number 11 was making a big impact on the game.

In the 2nd half York started as the first and scored from another corner Jack Leemo scored his second header of the match making it 3-3. The East Riding number 11 continued to be a thorn in York’s side causing problems and got a penalty and scored to make it 3-4. York battled well but ran out of steam in the last 15 and East Riding got a freekick 20 mins into second half scored with a header 3-5. The same player number 11 was now running riot and got through and converted to make it 3-6.

Good performances by Dan Richards at right back, Jamie O Connell at centre back and Isaac Overton up front when surging forward but man of the match for York goes to Jack Leeming with his brace of goals and well taken free kick resulting in another goal.

York travel to Leeds next week in a friendly.