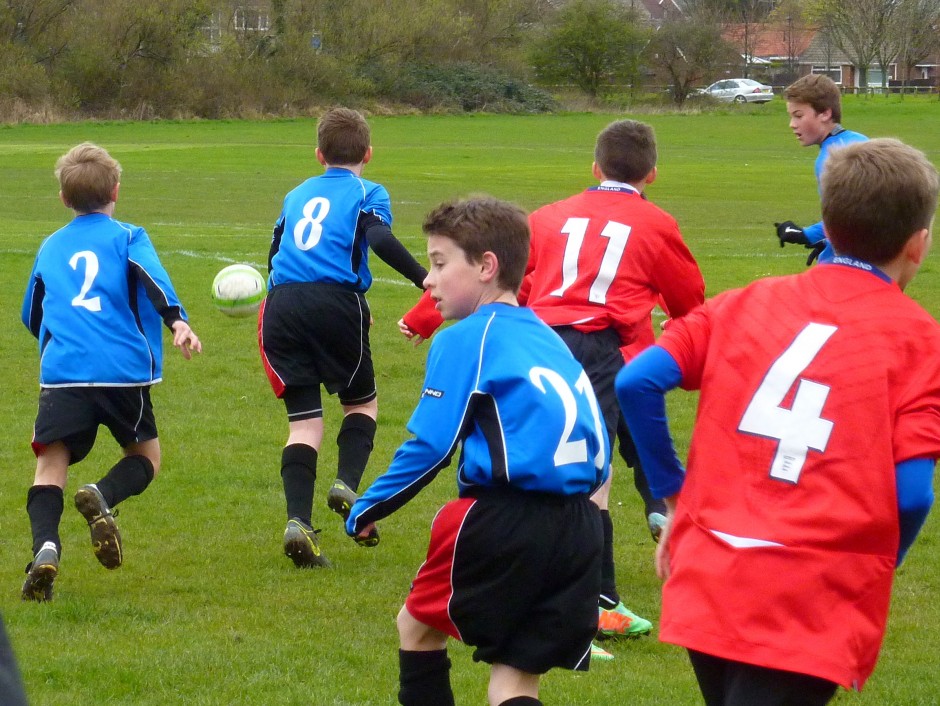 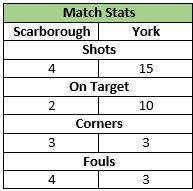 York U12 Schoolboys continued their league form with a 3-0 win over Scarborough.  After nearly a month without a game, York travelled to Scarborough for their fourth league game.

Scarborough were the quickest out of the blocks forcing a corner in the first minute with some neat passing play.  York’s defence of Liam White Simeon Hopkinson and Luke Jones dealt with the Scarborough attacks, but they along with the midfield couldn’t keep hold of the ball as the long lay-off between matches seemed to be taking its toll, with York being somewhat rusty in their play as the first two York attacks ended with off-side.

Scarborough tried to capitalise on York’s faltering play; but the grit and determination of the Elliot Oliver, Declan Racher, Alex Kemp and Harvey Stephenson in midfield and York’s defensive trio kept Scarborough at bay.

York warmed up as the game went on and by the 8th minute York were playing passing football and it was from a free kick delivered by Liam White that Elliot Oliver got the game’s first shot on target as Connor Teale, playing the lone striker, was defending from the front.  As the first period drew to a close York were having the better of the chances and their confidence was growing with Declan Racher and Alex Kemp forcing saves from the Scarborough keeper.

The second period saw the introduction of Leo Potts and Bankole Claudius-Cole, with the latter making a spectacular last ditch tackle in the penalty area to keep the scores level at 0-0.  With York playing flowing football and creating more chances with shots off target from Luke Jones, Declan Racher and Connor Teale, it seemed that York might rue their squandered chances.  It was on the half hour mark with some great play out of defence started by Liam White, through midfield where it was controlled by Leo Potts who knocked it out to the left wing for Declan Racher to hit a sweet left foot shot from the left hand side of the penalty area across the goal and Scarborough keeper hitting the back of the net high and right to make it 0-1 to York.

With York now pressing Scarborough with some great passing football, York won their first corner of the game, which was delivered into the box by Declan Racher for Harvey Stephenson to steal in and direct his header into the back of the net making it 0-2 to York on 35 minutes and 0-2 at the end of the second period.

York were now on top and brimming with confidence for the third period and were straight on the attack with chances from Alex Kemp and Connor Teal.  Another corner, this time delivered by Harvey Stephenson saw Luke Jones rise above the defence at the near post only to see his header go narrowly over the bar.  A cross from the Leo Potts on the right forced a mix up in the Scarborough defence and a sliced clearance was pounced upon by Alex Kemp at the far post to put York 0-3 up.

Nathan Storr has to be alert near the end of the game to pull off a save and to be quickly out to foil a Scarborough attack and keep another clean sheet.

Managers Comments (Nigel Kemp / Alan Oliver): All the boys deserved credit as they all worked hard for each other and played some great football that was a pleasure to watch.  They played great passing football and calmly controlled the game in all areas of the pitch with another clean sheet .

Man of the Match was awarded to Alex Kemp