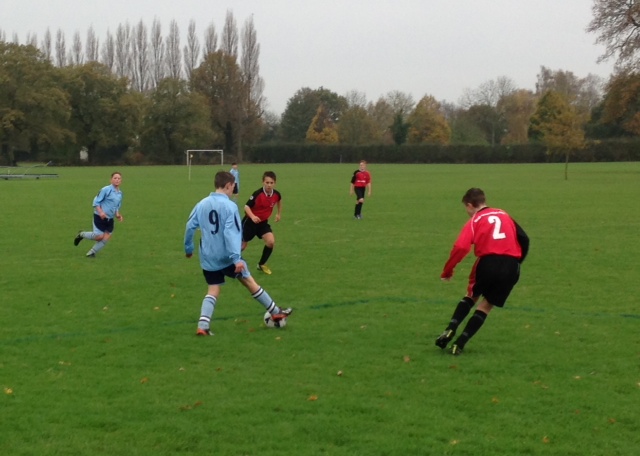 York Schoolboys Under 13’s returned to league action today with a heavily depleted squad due to injuries and holidays, this meant that there were debut performances for goalkeeper Harry Flatters and defender Will Anderson.

York started brightly and applied early pressure to the Bradford defence, this pressure resulted in winning a free kick after 9 minutes  on the edge of the area, the resulting free kick from Lucas Frankish was met at the far post by Will Anderson to score on his debut with a well taken header.

York increased their lead on 30 minutes following a flowing move which started with Lucas Wilson finding Charlie Jebson King who played a superb ball down the line into the path of the overlapping Nick Hutton who’ s cross picked out Manni De Nobriga to rifle the ball home to make it 2-0.

From the restart York were caught out by Bradford’s only meaningful attack of the first half and conceded from a fine strike from 20 yards giving York keeper Harry Flatters no chance in the York goal.

York responded well and from a corner Charlie Ward forced an excellent one handed save from the Bradford keeper to keep the score 2-1 to York at half time.

York started the second half with Manni De Nobriga winning the ball in midfield and crossing to Joe Crosby who was denied at point blank range by the excellent Bradford keeper.  York continued to control the game but Bradford did occasionally break but the York defence of James Hanson, Ollie Smith, Will Anderson and Lucas Frankish were alert to the danger.

York finally took control of the game after 10 minutes of the second half when Robbie Simpson set up Joe Crosby who’s strike from the edge of the area found the back of the Bradford net. The fourth goal followed soon after with Robbie Simpson again setting up Joe Crosby to fire in his second goal of the game. York were now in total control and further efforts from Charlie Jebson King and Manni De Nobriga going narrowly wide. York were then denied a penalty when York striker Joe Crosby was brought down in the area but the referee surprisingly waved play on. Lucas Wilson then had a free kick which went just wide of the Bradford post before Robbie Simpson wrapped up the victory with a fine right footed volley past the Bradford keeper to make the final score 5-1.

Congratulations to all the lads today, this was a good performance with some players having to play out of position, but all the lads gave 100% and thoroughly deserved the win.

Man Of The Match – Will Anderson.