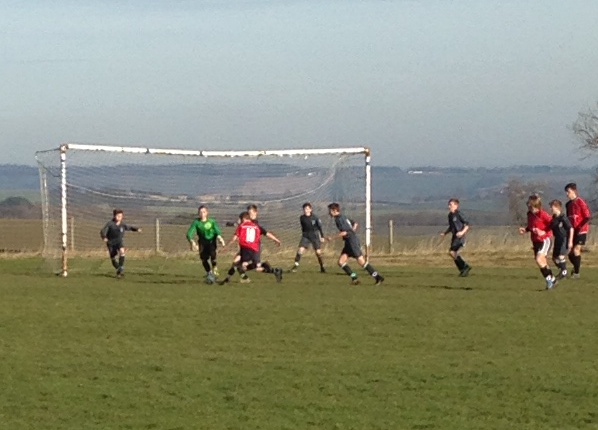 York Schoolboys Under 13’s returned to action today following a long winter break with a tricky away friendly to Hambleton & Richmond.
York’s warm up started with a half mile hike to the pitch, which was not the best surface we had played on this year.

York started brightly with Dom Jackson missing a good chance following good work from the midfield, but the first goal was not long in coming when Charlie Ward sent a defence splitting pass through to Charlie Jebson King to slot the ball past the advancing Hambleton keeper on 7 minutes.
York then continued to create further chances but couldn’t convert to increase the lead.

Hambleton then started to gain in confidence and take control of the midfield, then on 15 minutes a mix up in the York defence resulted in an own goal to level the scores at 1-1.

York were now on the back foot and only a fine save from York keeper Harry Griffiths kept the scores level. York then gained the lead back following good work from Lucas Wilson who released Rob Guilfoyle to force a corner, the resulting corner was then fired home by Dom Jackson at the second attempt. Shortly after York striker Rob Guilfoyle used his strength to go past the Hambleton defender to make it 3-1 to York at half time.

This was a strong start to the second half by York who created a number of chances but they were unable to convert any of them as a result of wayward shooting and good goalkeeping by the Hambleton keeper.

York’s fourth and final goal was a team goal which started with keeper Griffiths quick distribution, York worked the ball well through the midfield quickly with some neat passing allowing Jackson to force another good save from the Hambleton keeper only for Charlie Buckle to force the ball over the line to make the final score 4 – 1.

This was not our best performance of the season and we looked a little rusty following a long break and Hambleton provided a sterner test than we probably expected. But it was a good result and even when we are not playing well we seem to be able to force a win which is a credit to the lads and shows a lot of character.