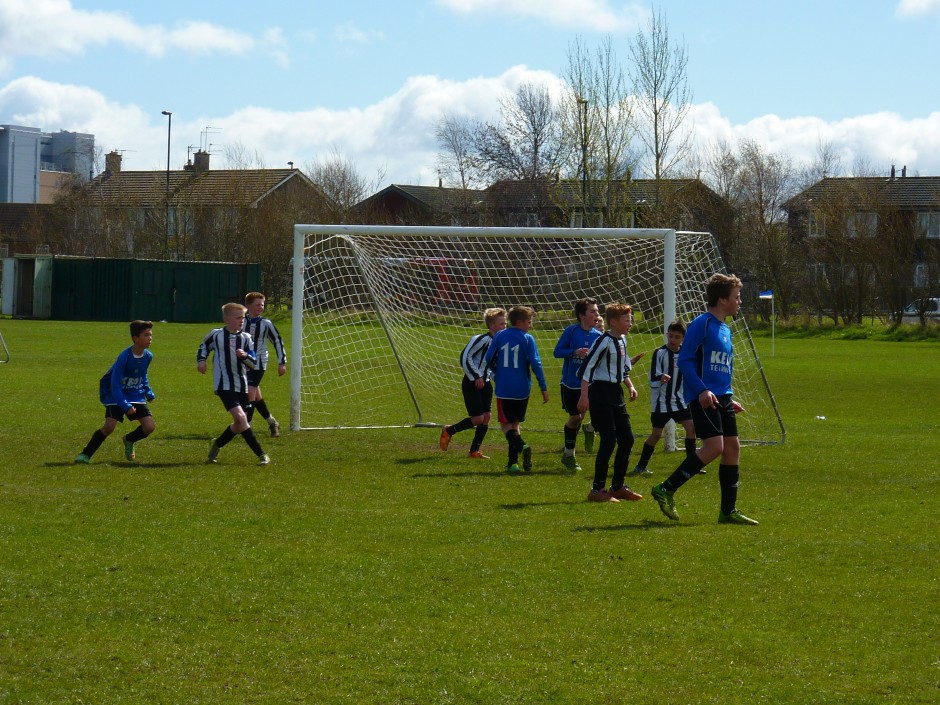 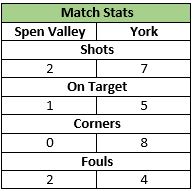 York U12 Schoolboys travelled to Spen Valley for their penultimate league game of the season.  In blustery conditions on a hill overlooking the M62 and a very bobbly pitch both sides struggled to play their normal passing game with ball control made difficult by the wind and pitch condition.

York were the brightest out of the blocks with the midfield of Bankole Claudius-Cole, Leo Potts, Harvey Stephenson and Liam White creating the better play  and putting early pressure on the Spen Valley goal, only to see the ball run out for a goal kick.  Some nice link up play between the midfield quartet ended with York’s first shot on target delivered by Leo Potts in the second minute.

After ten minutes Spen Valley settled into the game and started to pressure York but found York’s defence of Luke Jones, Tom Eaton and Alfie Evans resolute in their play dealing comfortably with the Spen Valley forward line.  Spen Valley managed to force a couple of successive corners, which were dealt with by the York defence and Nathan Storr the York keeper.

It was in the closing minutes of the first period that a ball played out from the York defence to Liam White in midfield through to Harvey Stephenson, who, after taking on two Spen Valley players put through ball to Connor Teale in the York attach for him to coolly finish to put York 0-1 up going into the break.

The second period started with both teams still struggling with the conditions but it was York again who fabricated the first chances with Harvey Stephenson seeing his effort saved and Elliot Oliver’s dipping free kick just clearing the Spen Valley bar.

Again mid-way through the second period Spen Valley started to pressure the York goal and a mix up in the York defence saw a sliced clearance sail over the top of the York keeper hitting the roof of the net putting Spen Valley back on level terms making the score 1-1.

The third period started with Spen Valley on the attack but stout defending from Simeon Hopkinson ensured that Nathan Storr in the York goal had a quiet game, while at the other end York could only muster a couple of shots on target, but nothing to trouble the Spen Valley keeper.

The weather and pitched conditions seemed to have taken their toll on both teams as they struggled to cause each other any problems in the last period of the game, with the hard fought game finishing 1-2 to York.

Managers Comments (Andy Eaton / Nigel Kemp/ Alan Oliver): Well done to all the players, they listened to the coaches. They were told about the weather conditions, and once they got used to the conditions, all the York players played good passing, fluent football which is the York schoolboys forte.

As a coach or a spectator, it’s a pleasure to watch that style of football and the lads seem to be getting stronger and stronger. Bring on next season!