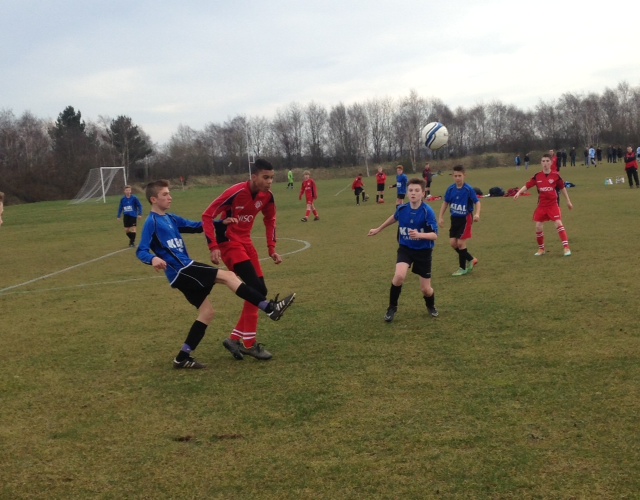 York Schoolboys travelled to Barnsley for a league fixture, looking to bounce back from their cup exit the previous week, and struggled in the early stages to cope with a narrow pitch and playing into the wind allowing Barnsley to create the early chances but stout defending from Jamie Higginbotham, Lucas Wilson, Ollie Smith and Charlie Buckle kept the home side at bay.

On ten minutes York took the lead against the run of play following a free kick from Danny Allinson which found the top corner of the Barnsley net. York now started to grow into the game and soon made it 2-0 when Joe Crosby shot from the corner of the area to find the back of the net. Just before half time York made it 3-0 when midfielder Charlie Ward ran at the Barnsley defence before dispatching his shot into the bottom corner to make it 3-0.

York started the second half with the wind behind them and soon increased their lead when Rob Guilfoyle broke the Barnsley offside trap to calmly slot the ball past the Barnsley keeper. York were now in total control and creating numerous chances with Robbie Simpson and Dom Jackson narrowly missing from good positions. The fifth goal was created when Nick Hutton’s accurate pass found Crosby who beat his maker to set up Manni De Nobriga who’s first time strike beats the Barnsley keeper.

York’s sixth came from a mix up in the Barnsley defence allowing Crosby to slot the ball into an empty net from 15 yards. The scoring was wrapped up when De Nobriga sent Crosby through to complete his hat trick and make the final score 7-0.

Following last week’s disappointment York bounced back with a confident performance and fully deserved the result today and remain unbeaten in the league.