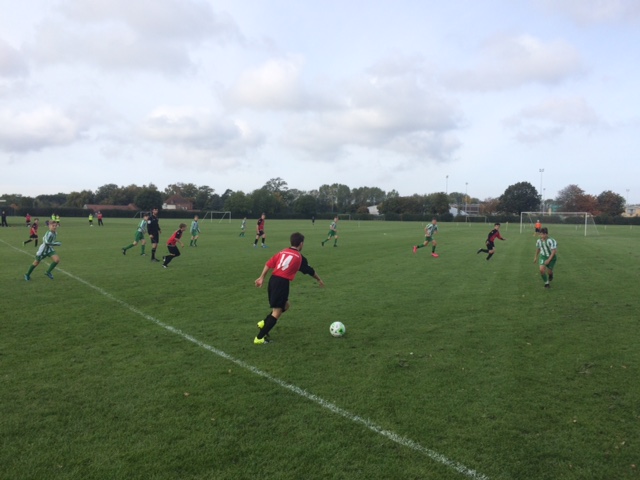 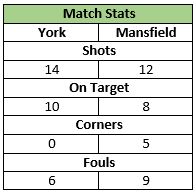 York U13s Schoolboys hosted Mansfield in their scintillating opening league game of the season.  Both sides started brightly each vying to mark their dominance in the game, York’s midfield of Alex Kemp, Elliot Oliver, Harvey Stephenson, Liam White and Leo Potts playing some great passing football found the Mansfield midfield just as resolute.  It was Mansfield that would eventually break through first in the 6th minute; but their first shot of the game flew harmlessly wide.

York continued to play passing football through the midfield, and some great link up play between the two forwards, Conner Teal and James Hymers, saw Harvey Stephenson race down the left flank to the bye line pulling the ball back to James Hymers inside the area, who coolly side footed the ball across the goal under the diving Mansfield keeper to put York 1-0 up in the ninth minute.

York were beginning to make their dominance count when , from a Leo Jones free kick, Alex Kemp raced down the right wing rounding the Mansfield defender beat the keeper with a great tight angled shot only to see it cleared of the line by the fullback.  Even though York were having the better of the early exchanges York’s defence of Ben Calam, Leo Jones and Sid McCoy were alert to extinguish the Mansfield attacks , with Leo Jones making the first of many well timed tackles.

Another York attack saw Leo Potts effort narrowly sail over the bar; but York were not having it all their own way in the game as Mansfield started to grow into the game with York having Joseph Hodge to thank for two fines saves in 20 seconds to keep the score at 1-0.

The game was end to end with York trying to capitalize on their early dominance and Mansfield looking for an equaliser.  A double save by the Mansfield keeper from Connor Teal and Leo Potts preceded another great save from Joseph Hodge, another goal was in the offing but to which team?  Then in the 30th minute a Mansfield free kick eluded the York defence and the Mansfield striker calmly slotted past the on rushing York Keeper to make it 1-1.  Mansfield pressured the York Defence for the last 5 minutes of the half but found no way through leaving the scores level at the break.

The second half started as frenetically as the first with York keeper Nathan Storr called into action within the first minute saving well from a Mansfield attack.  An Alfie Evans free kick found Ben Calam, who saw his shot well saved by the Mansfield keeper, with Alex Kemp and Luke Jones going close to putting York back in the lead, before Jacob Caringella, Alfie Evans, Sid McCoy and Leo Jones combining well in the York defence to keep the Mansfield attacks at bay.  With both teams having their spells of pressure and finding the defences resolute, it was from a Mansfield corner that there was adjudged to have been some pushing and Mansfield were awarded a penalty.

The Mansfield penalty taker struck the ball low and hard but found the diving Nathan Storr impenetrable with Jacob Caringella clearing the York line from the resulting rebound.  The game was still end to end with both teams searching for the winning goal York broke fast from a Mansfield corner but Liam White could only watch as his shot whizzed past the far upright.  A free kick delivered by Harvey Stevenson saw Luke Jones drive into the Mansfield penalty area dribbling through a packed Mansfield defence with challenges coming in thick and fast the referee had no option but to award York their first penalty, with Luke Jones stepping up and driving low and hard to the bottom left corner out of reach of the diving Mansfield keeper to put York back in front at 2-1 in the 57th minute.

Another great save from Joseph Hodge kept Mansfield at bay before Luke Jones could have put York further in front only to see his cross goal shot tipped onto the far post where York were unable to capitalise on the resulting rebound.

Both teams kept on attacking but when they did manage to find a way through the defences found both keepers impossible to break down leading to a nail biting finish with York holding out for a hard fought 2-1 win.

Managers Comments (Alan Oliver / Nigel Kemp): Well done to all the lads, played some great football against a strong resilient Mansfield team. York stood by their beliefs and we can see already the team is starting to gel and work together. Keep doing what you are doing and keep up the good work!

Man of the Match was awarded to Ben Calam.