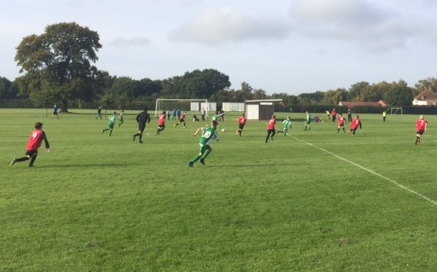 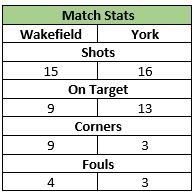 York U13s Schoolboys travelled to Wakefield for a friendly on a warm but wet November morning.  Wakefield were the first to press forwards forcing a corner in the third minute; but some good defending by Leo Jones and Sid McCoy ensured that it came to nothing.  Elliot Oliver, Leo Potts, Alex Kemp and Olly Hanley, in York’s midfield started to impose their dominance that allowed Luke Jones to have the first shot on target of the game which was well saved by the Wakefield keeper.  A great save at the other end by Joseph Hodge gave Wakefield their second, of what was to be nine corners of the game. Again York defended the corner well and playing the ball out through the midfield to the York Strikers saw Luke Jones drive into the box and committing the keeper, zipped a pass across the box to find Alex Kemp running onto and duly despatching it into the back of the net putting York one to the good in the twelfth minute.

York were now in the ascendancy, moving the ball well in midfield and with some great interchange play between Olly Hanley and Luke Jones saw the latter drive to the bye-line and pull the ball back across goal which found Alex Kemp racing in at the far post to again smash the ball into the net making it 0-2 to York inside 17 minutes.  Wakefield struggled to make an impact on the York defence with two successive corners easily dealt with by Connor Teale, Sid McCoy, Leo Jones and Ben Calam when in the 21st minute in another York attack saw Alfie Evans put York 0-3 up with a sweetly hit shot on the turn giving the Wakefield stopper no chance.

With York now comfortable in possession and 0-3 to the good decided to take their foot of the gas and overplay the ball allowing Wakefield back into the game, their determination paid off when in the 29th minute they caught York sleeping to pull a goal back making the score 1-3.  For the last 5 minutes York had Joseph Hodge to thank for pulling of a number of great saves, as Wakefield pushed for more goals before the break, and Connor Teal for making a last gasp tackle in the area to keep the half time score at 1-3.

A half time team talk and a reshuffle of positions saw York back in command and on the attack, which was rewarded in the first five minutes when some quick passing play in midfield between Elliot Oliver and Leo Potts sent Olly Hanley charging down the wing and pulling the ball back into the centre where Luke Jones was on hand to despatch the ball into the net putting York 1-4 in front.  From the kick off the ball was won by Liam White, who after jinxing round two Wakefield midfielders despatched a 25-yard rocket of a left foot shot that the Wakefield keeper could only push onto the underside of the crossbar and watch the rebound bounce the into the back of the net putting York 1-5 up and truly in the driving seat.

With Ben Calam, Connor Teal and Leo Jones in the York defence restricting Wakefield to long range shots, that were easily dealt with by Joseph Hodge in the wet and slippery conditions, York’s midfield of Elliot Oliver, Liam White, Alfie Evans and Alex Kemp dominating possession Olly Hanley, Sid McCoy, Luke Jones and Liam White were thwarted by the Wakefield keeper who pulled off a string of spectacular saves to deny York.

In the 66th minute and within a minute of his re-introduction Alfie Evans claimed his brace with a great strike to put York 1-6 in front.  Minutes later a Wakefield goal kick was picked up by Liam White just inside the opposition half and after playing a neat 1-2 with Luke Jones, despatch a sweet 20-yard strike that the Wakefield keeper could only watch as it hit the back of the net making it 1-7 in the 69th minute.  Wakefield had their keeper to thank again, diving to his right to pull off another fine save from Luke Jones on the stroke of full time to keep the score at 1-7 to York.

Managers Comments (Alan Oliver / Nigel Kemp / Neil Stephenson): Well done lads, improving every game, getting stronger. Just remember, not to switch off when you are 3-0 up as good teams will punish you.

Looking forward to Nottingham next sat, they are a strong, physical team so be prepared. Be strong mentally and physically and we will come away with a win!

Thanks for all your hard work and a big thankyou to Oliver for his first game for schoolboys. You did great!

Man of the Match was awarded to Alex Kemp.