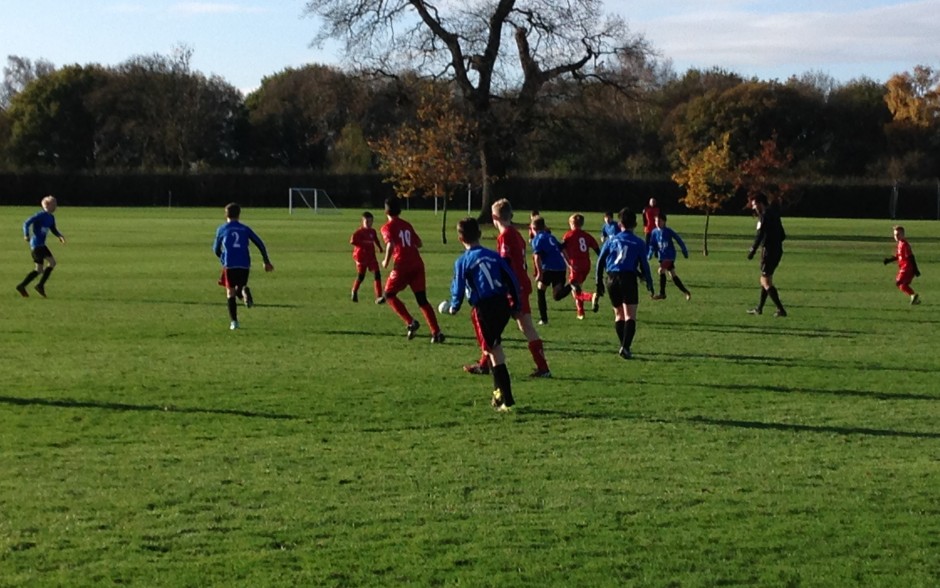 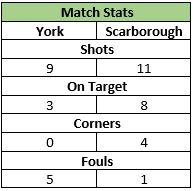 York U13 Schoolboys entertained Scarborough in the league on a cold gusty day.  As the game kicked off both sides struggled with the blustery conditions, with Scarborough engineering the first attempt at goal which flew narrowly wide.  York responded with a Luke Jones long range effort minutes later, after some link up play in midfield between Olly Hanley, Harvey Stephenson, Liam White and Elliot Oliver, but it wasn’t powerful enough to trouble the Scarborough keeper.

With Scarborough playing against the wind a mix up between the York midfield and defence gave Scarborough the chance to attack and a looping shot that was held up by the wind dropped behind Joseph Hodge in the York goal to put Scarborough 0-1 up in the 10th minute.

York responded well with James Hymers putting Harvey Stephenson through on goal with the Scarborough keeper saving the resulting shot. Some more pressure form York saw the Scarborough defence hold firm blocking two shots in quick succession before breaking and forcing Joseph Hodge in the York goal to make a fine save to keep the score 0-1.

With York playing with the wind they were unable to make the advantage count and Leo Jones, Jacob Caringella, Connor Teale and Sid McCoy in the York defence had to battle hard as Scarborough settled into playing in the windy conditions with York trailing 0-1 at half time.

Scarborough kicked off the second half playing with the wind and immediately put pressure on the York goal, it was Scarborough’s turn to find York defenders Ben Calam, Jacob Caringella and Olly Hanley standing firm with York’s midfield dropping back to help out as Scarborough attacked in numbers. York searched for the equaliser trying to hit Scarborough on the break with Leo Potts and Alex Kemp combining well with the former putting A through ball to Connor Teale who after rounded the Scarborough defender saw his shot beat the keeper but come back off the inside of the post.

It was Scarborough who were having the majority of the play, and after Joseph Hodge again saved well was powerless to stop Scarborough’s second goal in the 63rd minute.  York continued to battle hard and minutes later Alfie Evans and Ben Calam had broken up a Scarborough attack Ben released a through ball to Luke Jones who drove 40 yards into the Scarborough penalty area to put a low shot to the right of the Scarborough keeper to bring the score back to 1-2.

York pushed forward in search of the elusive equaliser, leaving themselves open at the back which Scarborough exploited and with minutes left on the clock the Scarborough attacker, one on one with York keeper Joseph Hodge put the game beyond York making it 1-3 at the final whistle.

Managers Comments (Alan Oliver / Nigel Kemp / Neil Stephenson): Well done to the lads after a shaky first half, they finally woke up in the second half, and made a game of it. Bit unlucky at the final whistle not to come away with a point.  Always remember in football you only get something out of it if you put the effort in. But well done in difficult conditions.

Man of the Match was awarded to Sid McCoy.