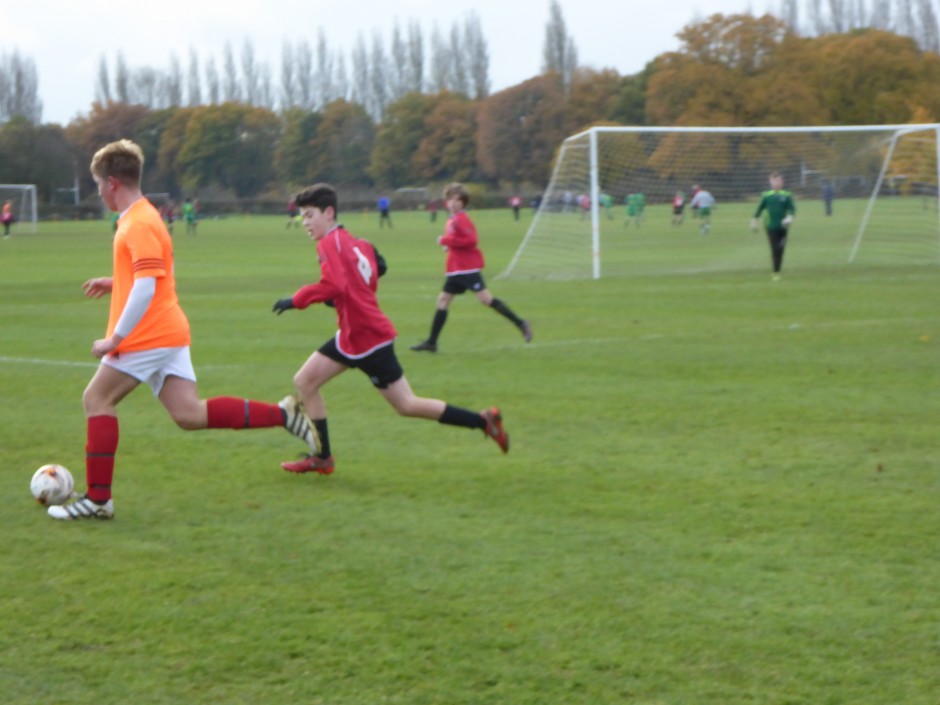 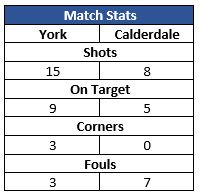 sted Calderdale for the first meeting between the two districts at York University.  Calderdale kicked off proceedings playing some fine passing football; but it was York who had the first shot on target after some good work down the right from Luke Ryder and Joshua Byfield releasing Ed Hammond who floated in a great cross from the by-line onto the head of Luke Jones, but with the header lacking any real power, was easily collected by the Calderdale keeper.  Seconds later York had Leo Jones to thank for the first of many block tackles to snuff out Calderdales first attack.

With the visitors edging possession Yorks back four of Olly Hanley, Sid McCoy, Luke Ryder and Leo Jones were kept busy stoutly defending with Calderdale forcing Joseph Hodge into action in the 7th minute.  Joshua Byfield, Harvey Stephenson, Elliot Oliver and Liam White battled hard in midfield with York content to soak up the Calderdale pressure and hit them in the break.  Both sides struggled to break each other down with Liam Whites teasing runs down the left and Harvey Stephenson tackling and swift passing being dealt with by the Calderdale defence.

As the half drew to a close it was York in the ascendancy forcing a number of saves from the Calderdale keeper and with minutes remaining a fierce shot from Luke Jones was parried down by the keeper with Edward Hammond the first to react putting the ball into the back of the net giving York the half time lead.

York started the second half buoyed by their earlier goal, and had their best spell of the game Edward Hammond and Luke Jones both having early shots off target.  A nasty challenge on the edge of the box on Harvey Stephenson gave York a free kick in a dangerous position which was pushed round the post by the Calderdale keeper.  The resulting corner floated in by Edward Hammond was met by Leo Jones but without any real power failed to be the Dales keeper.

York pressed for another goal and created a number of chances which saw Charlie Fort drive down the right wing skipping past a couple of challenges but again the Calderdale keeper stood firm saving his shot.  Calderdales defence and keeper stood firm as York couldn’t make their chances count until Luke Jones drove to the by-line whipping the ball back across goal which the Calderdale defender could only put into his own net as Edward Hammond bore down putting York 2-0 up in the 54th minute.

York continued to press; but it was Calderdale hitting York on the break minutes later pulling one back for the visitors.  With the wind in their sails the visitors pushed for an equaliser with Yorks defenders, Ben Fawcett, Sid McCoy, Olly Hanley and Leo Jones working hard to stifle the Calderdale attacks.  A high floated cross into the York penalty area was seemingly dealt with by the York defence only to see the clearing header loop over the stranded York keeper and into the back of the net putting Calderdale back on level terms at 2-2 in the 67th minute.

Managers Comments (Alan Oliver / Neil Stephenson): Well done lads you played against a good passing Calderdale side. At the end of the first half and from the start of the second half you took control of the game. A great credit to yourselves leading 2-0 until ten minutes to go, however, as I always tell you – play 100% until the final whistle otherwise good teams like Calderdale will punish you. Which they did!

Take all the positives away but always remember you cannot switch off especially at this level.  You will only ever get out of a game what you put into it.

Let’s go away and take this on board for next week.