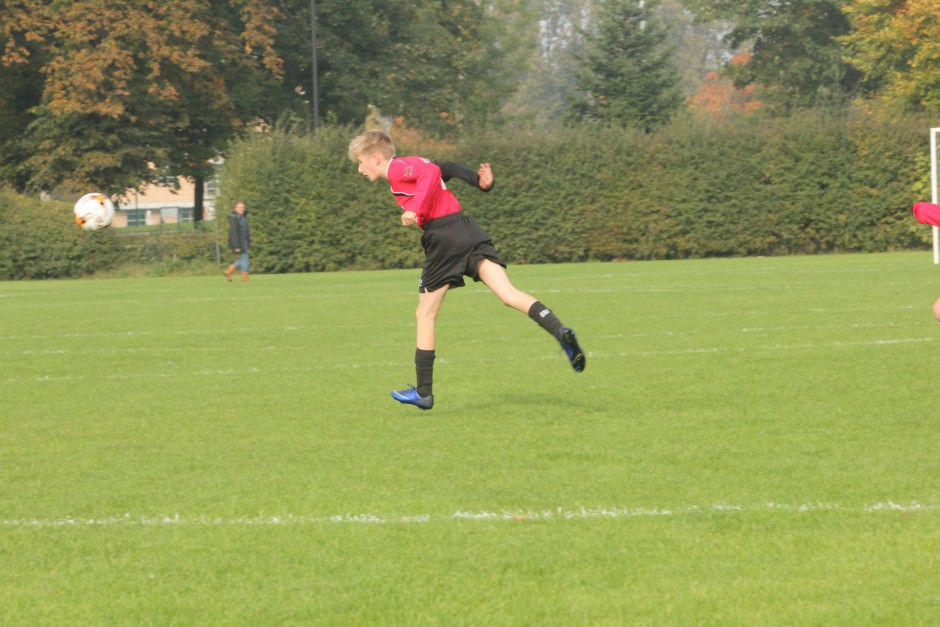 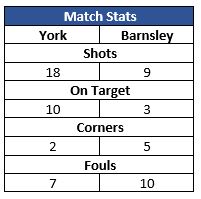 York U14s hosted Barnsley in their fourth league game of the campaign in foggy and murky conditions. York kicked off proceedings against a strong Barnsley side passing the ball well with Olly Handley and Harvey Stephenson patrolling the wings, with York mounting an attack from the off with Elliot Olivers through ball finding Olly Hanley down the left only for play to be pulled back for off-side in the first minute.

From the free kick, it was Barnsley that managed to muster the first shot on target but it was a tame effort and easily collected by Joseph Hodge in the York goal. Both teams tried to stamp their authority on the game but the York back four of Ben Rhodes, Leo Jones, Sid McCoy and Luke Ryder were resolute in their defending breaking down the Barnsley attacks and passing the ball intelligently out of defence.

Yorks first free kick in the 6th minute was delivered into the penalty area by Harvey Stephenson and met by Elliot Oliver; but his header sailed over the bar. Barnsley were defending strongly but York central midfield pairing of Ben Calum and Elliot Oliver and wingers Olly Handley and Harvey Stephenson were protecting the back four well and cutting out the visitors’ passes.

In the 10th minute York were awarded a free kick for a late challenge 18 yards out and slightly left of centre, taken by Luke Jones who curled a rocket over the wall top left corner leaving the Barnsley keeper stranded and putting York 1-0 up.

The game was end to end with Barnsley vying for a way through down the wings; but found Luke Ryder and Ben Rhodes in top form with Sid McCoy standing strong and Leo Jones executing his trademark sliding tackles, York Keeper Joseph Hodge was a relative by-stander. Barnsley first corner of the game in the 18th minute was the first real danger York had to deal with, which they did admirably with Luke Jones rounding his man on the edge of his own penalty area hit a sublime 32-yard pass to the feet of Liam white, the only York play ahead of the ball, on the half way line who set off on a mesmerising run past the three Barnsley defenders to the by-line cutting a pin-point ball back to Elliot Oliver who had charged 70 yards for a deservedly side foot into the centre of the gaping goal to put York 2-0 up.

York were forced into an early substitution in the 20th minute as Charlie Fort came on for the injured Olly Hanley who had sustained a shoulder injury in dealing with the earlier corner. From a free kick Barnsley found a way through the York defence but the resulting shot was well saved by York Shot stopper Joseph Hodge. With both teams playing some great football, chances were few and far between in the latter stages of the first half with Charlie Fort seeing his first shot saved by the Barnsley keeper. The Barnsley striker might have pulled one back for the opposition as he found space behind the York back four placing the ball passed the on-rushing Joseph Hodge who finger tipped the ball onto the right hand upright with the rebound going to safety, leaving the half time score 2-0 in Yorks favour.

The second half started at a frenetic pace with both teams believing they could win the game and both teams playing fast passing football. It was York edging the chance creation with Luke Jones and Charlie Fort going close. A through ball from Joshua Byfield saw Ed Hammond set off at electric pace beating the Barnsley left back but his shot was saved by the Barnsley keeper who had positioned himself to narrow the angle for the shot. York entered a period of dominance in attack creating chance after chance supported well by the midfield dynamo Harvey Stephenson and Elliot Oliver, Joshua Byfield and Charlie Fort. With Luke Jones hitting the right hand upright and then the crossbar from 12 yards it was inevitable that he would score his second and Yorks 3rd which came minutes later after Luke Ryder and Sid McCoy broke up a Barnsley attack with the former releasing Charlie Fort down the left setting off at electric pace out of defence and putting a through ball into Luke Jones who somehow managed to turn is marker and driving into the penalty area made no mistake slotting the ball to the right of the on-rushing Barnsley keeper.

York kept up the pressure with another driving run from Luke Jones to the by-line cutting the ball back for Ed Hammond who’s shot was somehow cleared of the line by the Barnsley defence. With Yorks defence breaking up another Barnsley attack, this time with Liam White charging out of defence and releasing Charlie Fort down the left, beating his marker for pace and slotting in a well-deserved goal putting York 4-0 up in the 65th minute. A late Barnsley attack had Joseph Hodge beat for the first time in the game; but with all the team playing incredible football York defender Sid McCoy cleared of the line for York to keep another clean sheet leaving the full time score 4-0.

Managers Comments (Alan Oliver / Neil Stephenson): Well done to all the lads, bounced back from last week, played some great passing football, and showed great character and this time played until the final whistle
Great performance from all, could have easily picked out 11 man of the matches, but Luke deserved it this week.
Here’s to Leeds game next week, onwards and upwards ⚽️👍👌

Man of the Match was awarded to Luke Ryder- for a great defensive performance. Always looked cool when one on one.