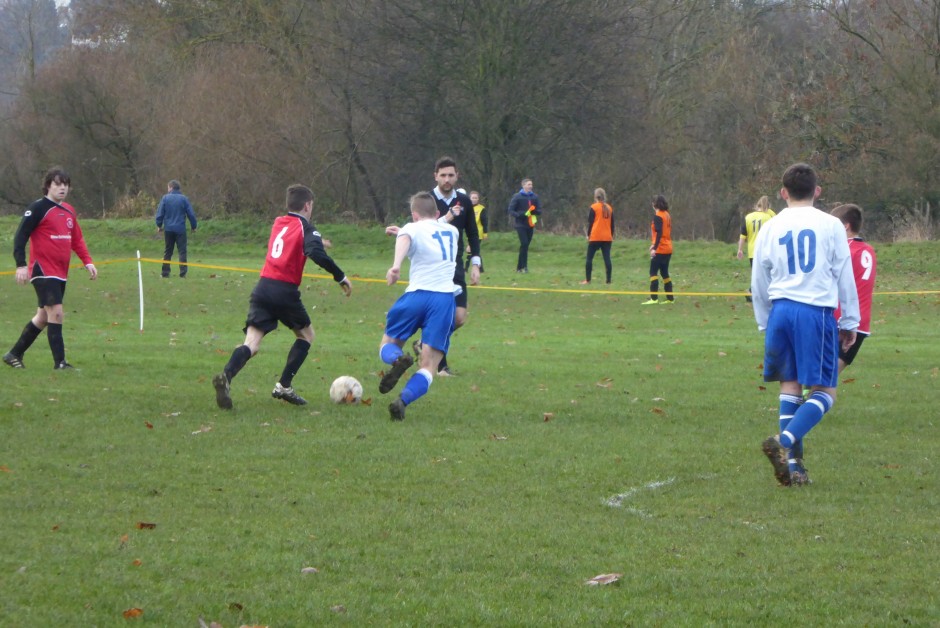 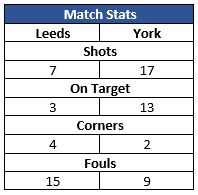 York U14s travelled to Leeds to play their final league game of 2016. York kicked off against tough physical opponents with the early battles in midfield as both sides tried to impose their dominance. In the 3rd minute a clash between two York midfielders and a Leeds midfielder led to Elliot Oliver being replaced by Charlie Fort due to a knee injury.

In the opening exchanges, it was Leeds that were having the better of the game forcing two early corners that were comfortably dealt with by Leo Jones, Sid McCoy, Ben Rhodes and Luke Ryder in the York defence. Liam White, Charlie Fort, Ben Calum and Harvey Stephenson worked tirelessly in the York midfield with Ben Calam forcing the first save of the match in the 10th minute from the Leeds keeper. It was from this grounding that York started to pressurise the Leeds defence with Charlie Fort going close and Liam White and Ed Hammond forcing save from the Leeds shot stopper.

Nothing escaped the referee as he saw every push and foul and was awarding free kicks to suite. It was from a free kick delivered into the box by Harvey Stephenson that saw the ball somehow scrambled into the Leeds net; but the referee had already blown for a penalty so the game was brought back. Luke Jones stepped up to side foot the ball into the bottom left of the goal away from the outstretched diving Leeds keeper putting York 0-1 up after 24 minutes.

Minutes later a cross delivered in from the right wing fell to Ben Calam on the edge of the box, who controlled it using his chest and hit a great dipping volley that hit the bar and bounced over for a Leeds goal-kick. York looked for a second goal to cement their lead but found the Leeds defence resolute and the Leeds stopper on form as he saved a cannon of a shot from Ed Hammond, as he broke through the defence, on the stroke of half time.

Leeds kicked off the second half determined to level the score applying some early pressure; but chances for Leeds were kept to a minimum with great defending from Joshua Byfield, Leo Jones, Sid McCoy and Olly Hanley as York tried to hit Leeds on the break. Joseph Hodge was called into action early on saving well from the Leeds striker to keep Yorks slender advantage.

The game was end to end as both sides attacked, but both found it difficult to create any meaningful chances against some great defensive plays. With less than ten minutes remaining Harvey Stephenson broke up play in midfield and drill a through ball into the path of Luke Jones who made no mistake this time powering the ball past the on-rushing Leeds keeper on 63 minutes putting York 0-2 up.

Minutes later Harvey Stephenson picked up a Leeds clearance and fed Liam White down the left inside channel, who driving through the Leeds defence put the ball in the bottom right of goal giving York a commanding lead of 0-3. With minutes remaining on the clock both Harvey Stephenson and Charlie Fort could have made it more for York, but for fine goal keeping from the Leeds keeper, the final score 0-3.

Managers Comments (Alan Oliver / Neil Stephenson): Well done to all the lads, competed in every area of the pitch. When they had the chance to play football, they did. And when they had to dig deep they showed a lot of character.  A big mention to Ed, ran the line well, be patient, believe in your ability and your luck will change.  Well done to all. Enjoy the rest next week. ⚽️⚽️⚽️⚽️👍

Man of the Match was awarded to Harvey Stephenson for his dominance in midfield and covering every area. Always there to break down the Leeds midfield attack. Outstanding today.