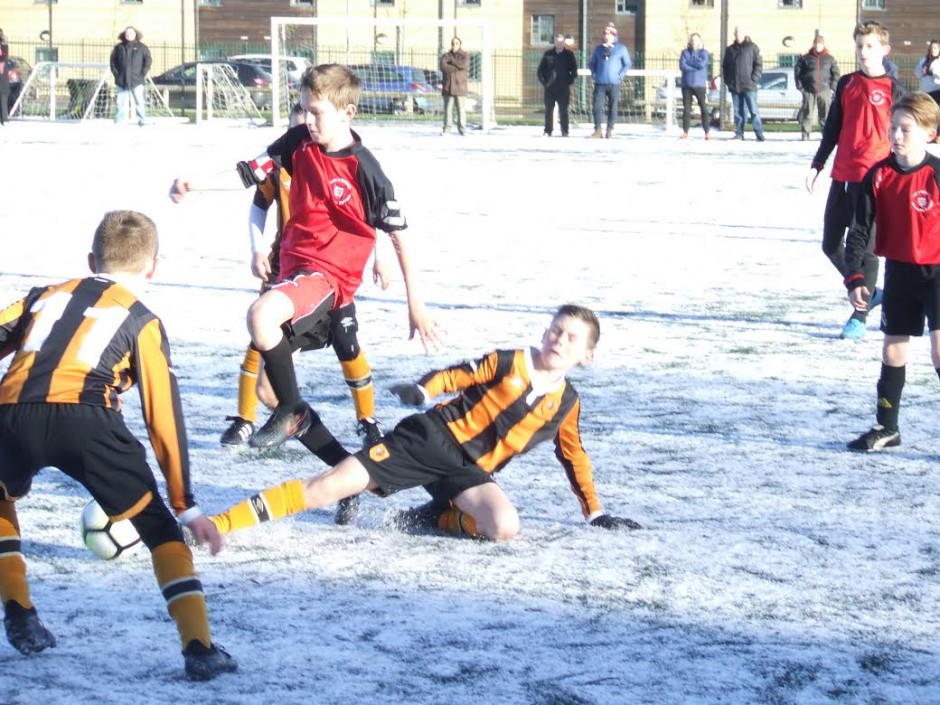 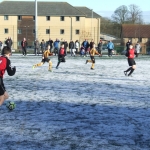 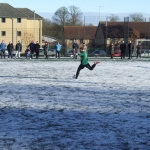 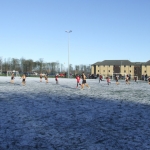 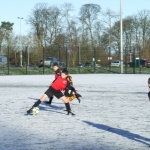 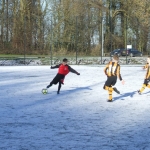 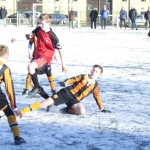 After the festive break, York Schoolboys U 12’s were looking for a good start to 2017.

A friendly V Hull Academy was going to be challenging. The first challenge was a change to the usual 9 V 9. This was changed to 11 a side (York having only 11 available players), with full size goals, giving the York team a taste of what is to come next season.

With everything to gain and nothing to lose, and with conditions more suited to Ice Hockey than football (see photos), York started brightly and showed their worth against the Premier League Academy. The quick pacey start was fully rewarded as York took the lead then went two up within the first five minutes. Thanks to the dynamic duo, Harrison Cain and Cole Gayles (0-2). York were then unfortunate to concede ten minutes later as they were down to 10 men due to a head collision which forced Oliver Tarbitt off the pitch, with no substitutes to bring on Oliver bravely came back on to continue the rest of the match and put in a strong performance in the Centre alongside Ellis Cattaneo who, against his new club dominated the centre of the park. Tommy Cahill continued to show his great run of form from 2016 with never ending work rate and tenaciousness to win the ball. 1-2

Once again York started the game with a real sense of urgency and tenacity that the Hull players couldn’t handle, after a great spell of possession and pressure the York team bombarded the Hull box with crosses from left to right. Dillon Meehan & Matthew Dawes relentless in making attacking runs on each wing. For the second time in the game, Cole Gayles managed to get himself onto the score sheet with a well placed strike finding the top corner (1-3). The work rate and closing down from the York players proved to be too much at times for the academy team and with a loose ball picked up by Matthew Dawes he squared the ball into the path of Harrison Cain to complete his brace (1-4).

The Hull side were looking for a way back into the match and began with a lot more urgency and set pieces. Goal keeper Noah Ellis was once again proving to be a solid line of defence with acrobatic shot stopping and communicating well with his defensive backline. Centre backs Tom Algar, Will Hotson both contributing with solid performances throughout the match.

Hull were once again on the attack and due to a mistimed tackle on the edge of the box were awarded a penalty. Up stepped the Hull player who coolly slotted the ball into the bottom left corner (2-4).

As York were in pursuit of their 5th goal, Hull were on the back foot. Just when everything looked as if it was coming to a close, a well-executed corner from Matthew Dawes found the head of a leaping Kaiden Butler who directed the ball into top right corner leaving the Hull keeper hopeless. A respectful celebration followed not wanting to dent his relationship with his new club Hull City (2-5).

Overall as a team York U12’s put in a fantastic performance and started 2017 in the best way possible. Despite the match being a friendly this is a result that will fill the players with confidence going into their cup match this Saturday V East Riding in the MD Trophy @ home. Big thank you to the parents, siblings and grandparents that made the trip to Humberside.

MOTM – Due to an outstanding team performance, all 3 coaches came to the conclusion that all 11 players were worthy of MOTM award. Well done boys.