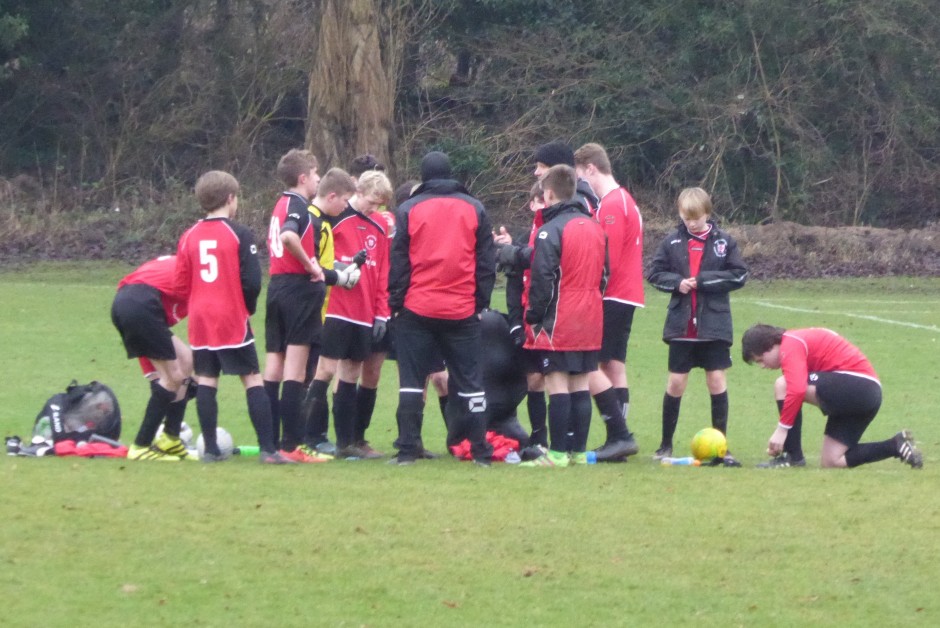 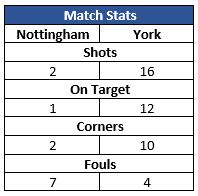 York U14s resumed their league campaign in 2017 making the long journey to Nottingham after a six-week festive break.

York kicked off proceedings with the midfield of Harvey Stephenson, Elliot Oliver, Ben Calam and Charlie Fort taking control of the midfield with a Harvey Stephenson 20-yard strike was pushed round the post by the Nottingham keeper to give Yorks first corner of the game in the 3rd minute.  Nottingham cleared their lines but Yorks back four of Leo Jones, Ben Fawcett, Ben Rhodes and Sid McCoy comfortably marshalled the Notts. attackers feeding Luke Jones just inside the Sheriffs men’s half, who put a sublime over the top pin point pass to the on rushing Liam White, who taking it round the Nottingham defender side footed it to the left of the keeper putting York 0-1 up in the 4th minute.

The York boys were comfortable in possession playing some neat one touch football, with wingers Ben Calam and Charlie Fort finding space down the wings.  Another Harvey Stephenson shot was well saved by the Nottingham keeper at the expense of a corner, with Stephenson delivering the corner onto the head of the rising Luke Jones, the resultant header narrowly sailing over the cross bar.

Nottingham struggled to mount any form of attack as York kept them pinned into the own half; but the Notts. keeper was on form, this time turning a Luke Jones shot round the post at the expense of another corner.  Three corners in succession were delivered into the area by Harvey Stephenson with the third falling to Luke Jones 8 yards out, who rounding two defenders in a crowded penalty box saw his first shot charged down picking up the rebound managed to put the ball in the back of the net putting York 0-2 up after 17 minutes.

A free kick taken by Ben Fawcett was passed onto Liam White, who deftly flicked the ball over the Nottingham back line for Ben Calam to beta the on rushing Nottingham keeper in the 50/50 neatly rounding him to slide the ball into the empty net putting York 0-3 up on 24 minutes.

With the York defenders protecting keeper Joseph Hodge it wasn’t until the 28th minute here he was called into action to take Yorks first goal kick. York had more chances to extend their lead with Ben Calam and Luke Jones both finding the Notts. keeper in fine form to keep the score at 0-3 at the break.

Nottingham kicked off the second half putting pressure on the York goal forcing two corners in quick succession but Yorks defence of Olly Hanley, Ben Fawcett, Leo Jones and Sid McCoy stood firm and protected their keeper well.  Nottingham continued to press and forced York keeper Joseph Hodge into his first, and only save on 43 minutes.

After soaking up some Nottingham pressure Ben Fawcett saw his shot cleared of the line from a Harvey Stephenson free kick before Liam White had a shot blocked by the Nottingham defender inside the penalty area as Nottingham dug deep to keep York out.

Joshua Byfield linked up with Liam White down the left, seeing his shot go narrowly wide while Edward Hammond driving in from the right forced the Notts. Keeper into another fine save as York again took charge of the game.  Another corner delivered by Harvey Stephenson saw Ben Fawcett’s shot narrowly sail over the bar before Luke Jones driving into the box on a tight angle had his shot saved at the near post by the Nottingham keeper.

The game finished with a rare Nottingham attack with the Notts. striker firing wide from the edge of the area leaving the score 0-3 at full time.

Managers Comments (Alan Oliver / Neil Stephenson): Well done to all the lads. Sorry about the palaver with the ref and the parent linesman. You kept your concentration; and did not let that get to you. That’s a credit to you, your concentration and belief in your football.

Outstanding football.  Please carry on what you are doing, believe in yourself. Express yourselves on the field as you are doing; and let teams worry about you.

Man of the Match was awarded to Ben Fawcett for his outstanding defending qualities and runs down the right side.  Also his great crosses into the box.