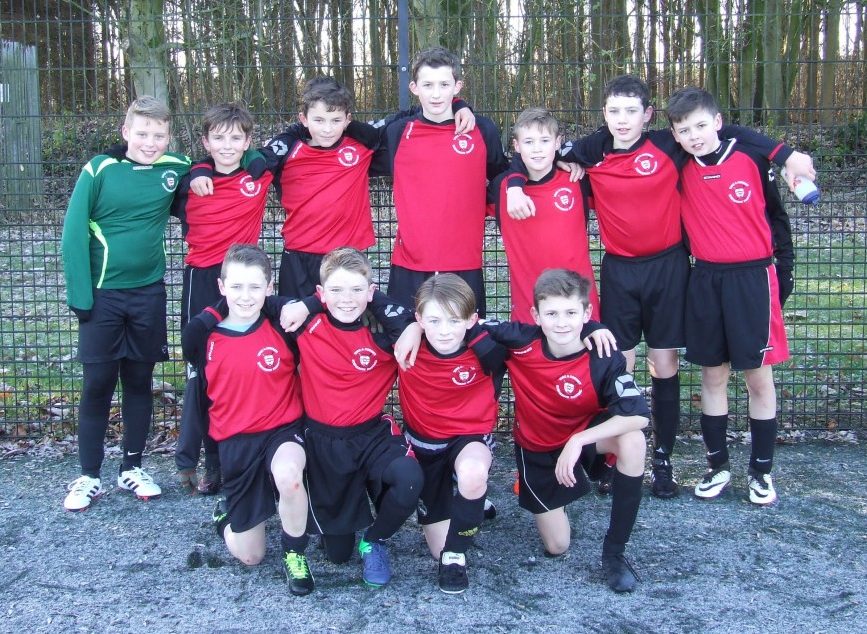 After last week’s disappointing semi-final result in the Michael Dale Trophy, York U 12’s were hoping to regain their winning ways.

York started the match on the front foot and were the dominant team. Their hard work paid off when a pass from Cole Gayles found Tom Algar on the edge of the Leeds penalty area, who then unleashed a fierce shot which proved too much for the Leeds keeper. 0-1.

The wet and slippery conditions were to play a part when moments later a Leeds midfielder tried his luck from outside the box and somehow the ball found its way underneath York’s keeper Noah Ellis. 1-1.

Undeterred York, found the desire to keep up the battle. The midfield of Gayle, Algar, Cattaneo and Butler never giving up the fight and their creativity causing their opposing numbers no end of problems. On the attack once more and a great passage of play and a great through ball from Dillon Meehan to Cole Gayles who played the ball through to Tommy Cahill who cut in from the left-hand side and slotted the ball past the sprawling keeper into the bottom left hand corner 1-2.

Leeds running out of ideas had to resort to long ball tactics and it nearly paid off a couple of times. The solid and ever hard working defence of Dawes, Hotson and Meehan were making it hard for the Leeds attackers to find any way through and on the few occasions they did, could not get past  the inform keeper Noah Ellis proving his worth by matching each of the Leeds attempts.

With the game closing in towards the end of the first half, Leeds looked to be on the hunt for a goal to take into the break, after some great tracking back from Cole Gayles the ball changed hands of possession and with some fancy footwork he found himself with enough time to play a channel ball into space for Cahill who continued his run down the left hand side and whipped in a terrific delivery to the back post for Kaiden Butler to leap onto with a pin perfect header into the top corner (1-3).

With 1 minute to go (time added on, surely?), from a Leeds a throw in, next to the York penalty area, a cross came in and the ball was met by a Leeds midfielder who headed into the York net.

After a great first half performance and a few substitutions, York could not afford to take their foot of the gas, and as the first half got under away, it was Leeds who started the brighter of the two Yorkshire teams and after a good spell of play it was Leeds who were gifted with their first opportunity. With the initial attempt being saved by Noah Ellis the ball landed to the Leeds striker who calmly placed the ball into the back of the net (3-3).

With the home side now eager to bring the game back and put the score line within their favour it was once again Leeds who took their chance with the ball breaking to the no.9 who composed himself to make it (4-3).

York tried to regain the lead and were persistent in trying to do so, great defensive work and contributions from Tom Coy, Oliver Tarbitt and lone striker Harrison Cain, relentless hard work throughout the team, their energy levels were faultless. In doing so they exposed themselves to the quick counter attack (long ball) of Leeds and in the final minutes Leeds sealed the victory with a final goal that was lifted over the top of  Ellis and despite his best efforts the ball dipped in just beneath the cross bar.

A great effort from the boys against strong, physical tall opponents.