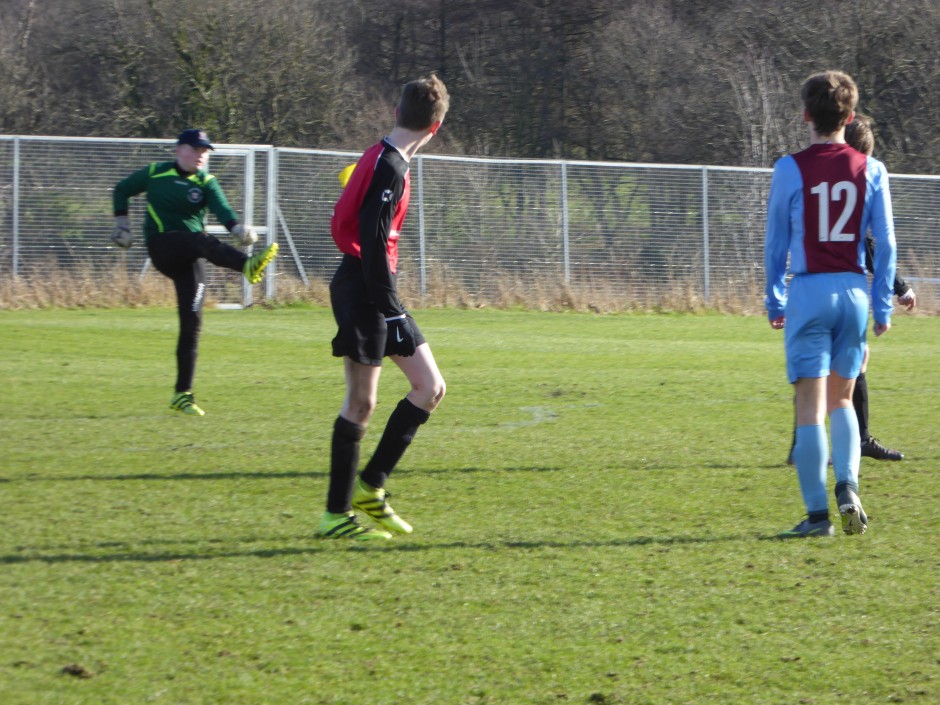 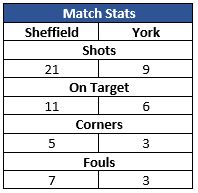 York U14s travelled to Sheffield on a crisp February morning in the League.

With Sheffield starting the game and dominating early possession, it was York attacker Luke Jones forcing the first save of the match from the Sheffield keeper in the 3rd minute forcing the ball for a corner.  Harvey Stephenson’s corner was cleared by the Sheffield defence which put them straight onto the attack with Joseph Hodge saving at the visitors end a minute later.  With both teams having a good stat to the game, it was end to end with a Ben Calam forcing another great save from the Sheffield keeper from a Harvey Stephenson free kick.

With York now dominating possession a 25-yard free kick delivered into the box by Luke Jones was headed back across goal be Ben Fawcett, falling to Ben Calam, who on the turn fired his shot into the back of the net from 6-yards putting York 0-1 up in the 9th minute.

From the restart, Sheffield went on the attack, pressuring the York back four of Ben Fawcett, Leo Jones, Sid McCoy and Olly Hanley defending resolutely with the help of Elliot Oliver, Liam White, Ben Calam and Harvey Stephenson in midfield as Sheffield looked for the equaliser.  On 15 minutes the Sheffield right winger cut the ball back to the edge of the box, finding the Sheffield striker in some space who hit a great shot into the roof of the net leaving York keeper Joseph Hodge little chance, and making the score 1-1.

The game was end to end with Harvey Stephenson forcing another Save from the Sheffield keeper before Joseph Hodge kept the Sheffield attacker out diving full stretch to his left. With Edward Hammond running the channels as Yorks outlet and seeing his effort fly narrowly wide before Joseph Hodge was called into action again to keep the scores level.

A driving run down the right by Luke Jones saw his cross come shot skim of the crossbar and go harmlessly for a Sheffield throw-in, while at the other end Joseph Hodge pulled of another fine save tipping the ball over the bar as Sheffield ended the half the stronger of the two sides.

Sheffield started the second half the dominant of the two teams looking to take the lead and were awarded a penalty in the 41st minute for a push in the box.  The Sheffield penalty taker struck a sweet shot that was rising all the way, which hit the top of the crossbar with force, flying harmlessly over, a let of for York.

Yorks defence of Ben Rhodes, Ben Fawcett Sid McCoy and Leo Jones battled hard to keep the scores level with Joseph Hodge commanding his area and saving any shots that eluded the York back line as Sheffield upped the tempo.

York stuck to their task and were awarded a free kick in the 51st minute 2-yards from the Sheffield area.  The resultant free-kick delivered by Luke Jones clipped the outside of the wall with the Sheffield defence clearing their lines.  With the ball falling to Joshua Byfield on the left, delivering the ball back to the edge of the Sheffield penalty area found Harvey Stephenson in space whose shot dipped over the Sheffield shot stopper hitting the back of the net and putting York 1-2 up in the 52nd minute.

From the restart, Sheffield pressed for another equaliser but found the York keeper, Joseph Hodge in great form, a Joshua Byfield shot for the visitors was well saved before a late corner delivered into the York box causing scramble between defenders and attackers with Joseph Hodge saving the final shot.

A last throw of the dice for Sheffield in the dying minute as all eleven players for Sheffield were in the York half for a long throw into the visitors’ penalty area, cleared by Sid McCoy saw Luke Jones round the Sheffield keeper, in the York half, but as he ran clear for a 50-yard unchallenged run the ref blew for full time, giving York the win in a thrilling game.

Managers Comments (Alan Oliver / Neil Stephenson): Great performance.  You played for 70 mins which is what I’ve been asking for the last two weeks. You all dug deep, battled well all over the field. Each person did their bit against a great strong Sheffield side. Next week we have Derby at home.  Let’s continue playing with commitment, and let other teams worry about us.

Men of the Match was awarded to Joseph Hodge for two amazing saves today amongst others in the first half. Ben Calam for running the front line, shutting people down and finding space afterwards.