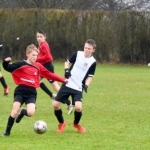 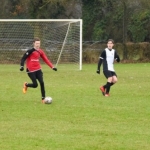 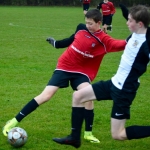 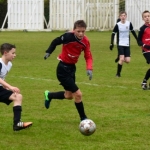 York played host to Derby in the league, the first time the two teams have met in two years but this won’t be the last that they see of each other this season as York have the pleasure of an away trip to Derby in the next round of the West Yorkshire cup.

Derby arriving with a large squad of nineteen players and they used all of them with a frantic pace that had the home side on the back foot for the first ten minutes. York weathered the storm with solid performances from Ben Hudson, Ben Pearson and Joe Roughley in the York defence.

As the game progressed with both sides creating chances, York through Ben Thornton and Lewis Humphreys, both going close from range for the home side, Toby Warren was kept busy in the York goal mostly mopping up from behind his defence and trying to release his attack. Both midfields worked hard to try and gain an advantage over the other Will Hollings and Harry Tinker both working tirelessly across the centre of the park.

Yorks main threat came down the left wing through Taylor Bell who was working the Derby fullback at every opportunity. The half finished with neither side really getting the better of the other.0-0.  With the score all level the first goal was always going to be crucial in a game that was so competitive, with this in mind York swapped from a back four to a back three looking to take the advantage of the extra man in midfield.

This seemed to have worked with the home side looking the more likely to break the dead lock with Eliott Heath having a chance early on. Dan Tingle was playing the holding role in midfield breaking up the Derby attacks which were now restricted to breaks.  Midway through the half Taylor Bell was awarded a free kick on the edge of the box from a push from behind. Elliot Rayner stepped up taking the free kick, which beat the wall, but not the keeper, with both defences on top, the game was now a midfield battle, George Turbine was scrapping for every ball, Oliver Kilvington kept the home side on the front foot as best he could.

Ten minutes to go and York throw their big centre half Ben Hudson into attack giving them a three man attack. York had a late scare when Todd Edgar raced from his box to clear a through ball from the Derby midfield, just getting to the ball before the advancing forward sliced the ball up into the air and into the path of the Derby Striker. Edgar closed down the striker pushing him wide and giving his defence chance to regroup, the crisis averted. York Schoolboys finished the game on the attack.
Hudson making a nuisance of himself in the Derby box but yet again the home side could only come away with a battling draw. 0-0.