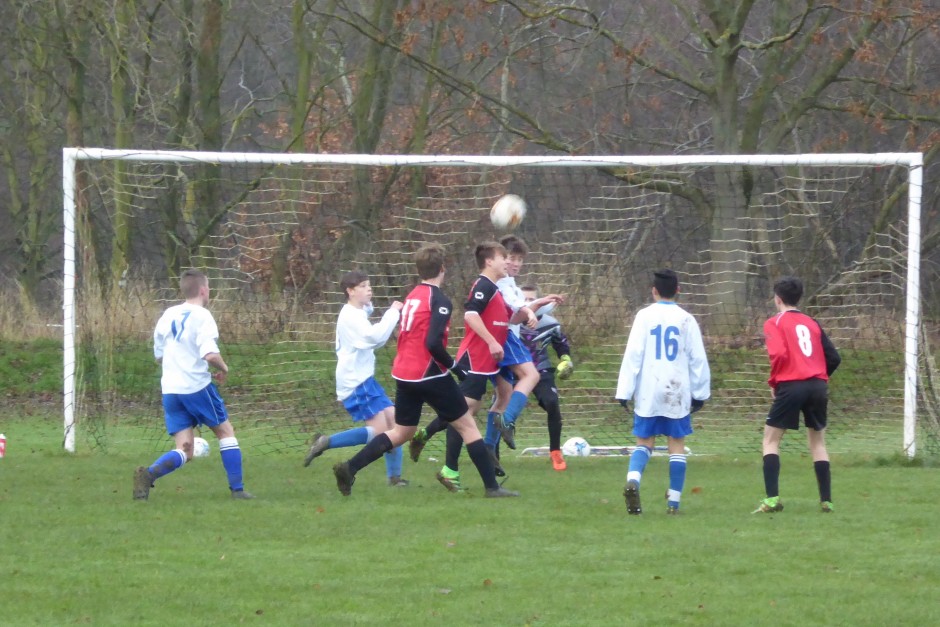 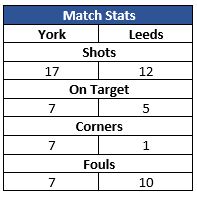 On a drizzly February morning York U14s played host to Leeds in a friendly. From their kick-off, York sprinted out of the blocks and were on the attack playing smooth passing football, that seemed to catch Leeds napping, and were rewarded with a corner in the 1st minute.  Ben Calam delivered the corner into the 6-yard box, that started a goal mouth scramble with Leeds desperate to stop York scoring so early with the final ball, eventually, hit wide by Luke Jones.

York were having the better of the early exchanges, with Leeds trying to hit York on the break with Joseph Hodge saving comfortably either side of Ben Fawcett and Ben Calam forcing the Leeds stopper into saves.  More pressure from York gave them three consecutive corners; but York were unable to breakdown a resolute Leeds defence.  Leeds found Yorks defensive quartet of Ben Rhodes, Leo Jones, Joshua Byfield and Luke Jones just as resolute as Ben Rhodes and Leo Jones combined to breakdown the Leeds attack finding Luke Jones who driving out of defence putt a ball through the middle to Edward Hammond who, on the shoulder of the Leeds defence, beat the defender for pace and slotted the ball to the right of the advancing Leeds keeper to put York 1-0 up in the 11th minute.

With York looking comfortable in possession with Liam White, Elliot Oliver, Ben Fawcett and Olly Hanley dictating the midfield they couldn’t make the dominance count as Leeds defended determinedly and continued to be a threat on the break. Leeds managed to equalise when York cleared a corner to the corner of the penalty area that fell to the Leeds midfielder, who hit a dipping shot catching keeper Joseph Hodge unsighted, that managed to squirm underneath the York stopper, in the wet and slippery conditions putting the scores level at the break.

York started the second half playing the same flowing, passing football with the introduction of Harvey Stephenson, Luke Ryder and Sid McCoy and Leeds buoyed by the equaliser the game was opening up with both sides unable to produce a positive end result for their efforts.  Joseph Hodge was called into action before Ben Calam forced a save form the Leeds keeper and Edward Hammond, put through on goal, only to see his effort agonisingly hit the post. Luke Jones forced and acrobatic save from the Leeds keeper tipping his volley over the bar before York had Joseph Hodge, then the post to thank as Leeds pressed for the lead.

A goal kick, picked up in midfield by Harvey Stephenson and laid out to left winger Olly Hanley running in on goal and playing a neat one / two with Luke Jones in the Leeds penalty area drove his shot bottom right corner to put York back in front in the 69th minute.

From the kick-off, Leeds were straight onto the attack with the left winger cutting in on goal cleverly chipped the advancing York keeper Joseph Hodge to put them level in the 72nd minute.   York responded immediately with Liam White forcing the Leeds keeper into another save. With both defences holding firm the game finished 2-2.

Managers Comments (Alan Oliver / Neil Stephenson): Well done to all the lads who managed to play in different positions, and with 9 substitutions it showed me as the manager that as a team; you’re more than capable of adapting to changes when needed.  Showed some great football and determination on a cold, wet miserable winters day.

Man of the Match was awarded to Olly Hanley.