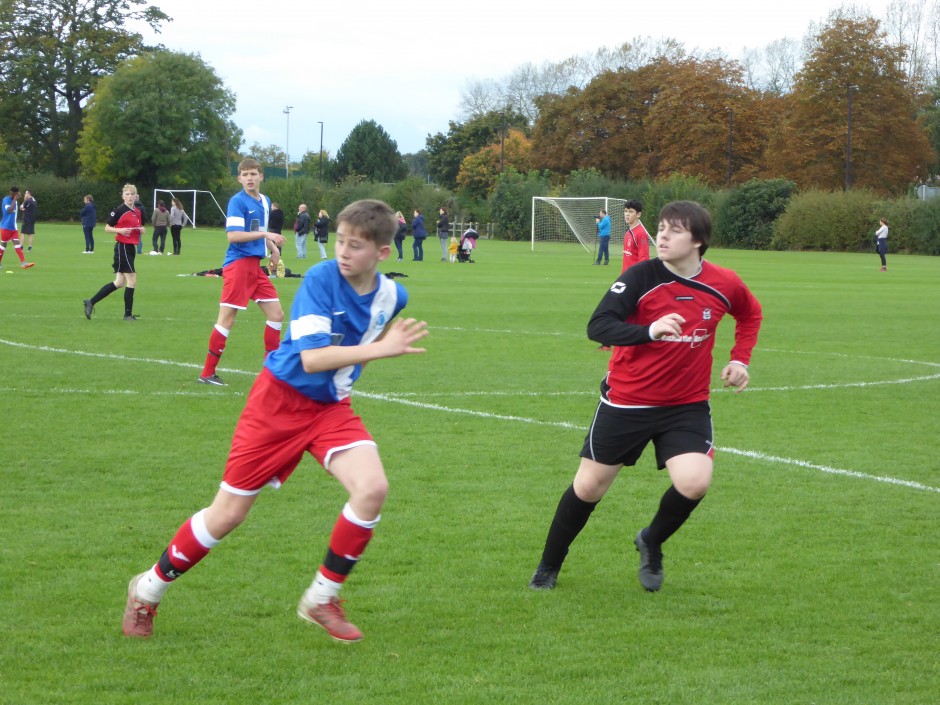 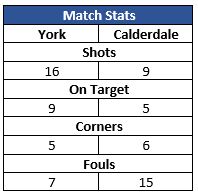 York U15s hosted Calderdale in their third league game buoyed by the 5-2 win over Sheffield in a friendly the previous week.

Both teams started brightly with Ben Calam, Elliot Oliver, Harvey Stephenson and Liam White battling in midfield.  Harvey Stephenson was the first to test the Calderdale keeper in the 9th minute from distance after a free kick delivered by Ben Calam. With York edging procession and dominance, in the early stages of the game Elliot Oliver released Luke Jones who running across the box despatched his shot across the keeper into the bottom corner of the Calderdale goal putting York 1-0 up in the 12th minute.

Yorks lead lasted less than 4 minutes when a mix up in the York penalty area from a Calderdale corner ended up with the ball in the back of the York net drawing Calderdale level in the 16th minute.  Minutes later a corner delivered by Ben Calam was cleared to the edge of the Calderdale penalty area where Max Potter was unlucky not to keep his volley down as it sailed over the bar. York continued to press as Leo Jones, Sid McCoy, Louis Jarvis and Max Potter kept the Calderdale attacks quiet with Nathan Storr having little to do in goal.  Will Jarvis was unlucky to see his deft chip over the keeper cleared of the line, at the expense of a York corner, by the Calderdale defender.  The same defender was again on hand when Luke Jones goal bound header was again cleared of the line by the same defender.

As Yorks back four broke down a rare Calderdale attack Louis Jarvis released namesake Will Jarvis with a long through ball down the channel with the latter pushing the ball past the defender and placing it neatly into the bottom right hand corner past the on-rushing keeper to put York back in the lead. York had chances to increase their lead, before half time, through Luke Jones and Will Jarvis with the Calderdale keeper keeping the score at 2-1 going into the break.

York started the second half strongly with Liam White passing the Calderdale defence as he raced racing down the left wing and putting in a slide rule pass into the path of Will Jarvis who side footed it into an empty net from 4-yards putting York 3-1 inside the first minute of the second half.

Calderdale weren’t giving up as they tried to hit York on the break with Joseph Hodge called into action, in the York goal, in the 48th minute.  With Calderdale having their best attacking period of the game so far, forcing three corners in as many minutes with Roscoe Dawson in the York defence making no mistake with the clearance.  At the other end York found the Calderdale defence just as resolute at defending corners as they failed to capitalise on their chances.  The game opened up as Calderdale pushed to get back in the game and in the 52nd minute they hit York on the break outnumbering the York defenders with a cross from the left wing found their right winger unmarked in the penalty area who made no mistake with his shot bringing the score back to 3-2.

With the gale end to end teams had chances to score; but didn’t really test the keepers, with Edward Hammond and Harvey Stephenson both having shots off target, it was the latter who put Will Jarvis through on goal, making no mistake and hitting his hat-trick to put York 4-2 up in the 60th minute.

Five minutes later Calderdale pulled one back from a well taken free-kick to make it 4-3 in the 65th minute.  The remaining 15 minutes saw both defend well as Calderdale pushed for the equaliser and York extend their lead with neither team forcing the respective keepers into action with the score ending 4-3 to York at the final whistle.

Managers Comments (Alan Oliver): : Well done to all the lads today, again an outstanding performance. What a pleasure to watch exciting football again this season. Everyone did their part today. Please carry on what you are doing. All the parents and supporters are enjoying the football you are playing. We are all excited for your future football.

Man of the Match was awarded Will Jarvis for his work rate off and on the ball today.