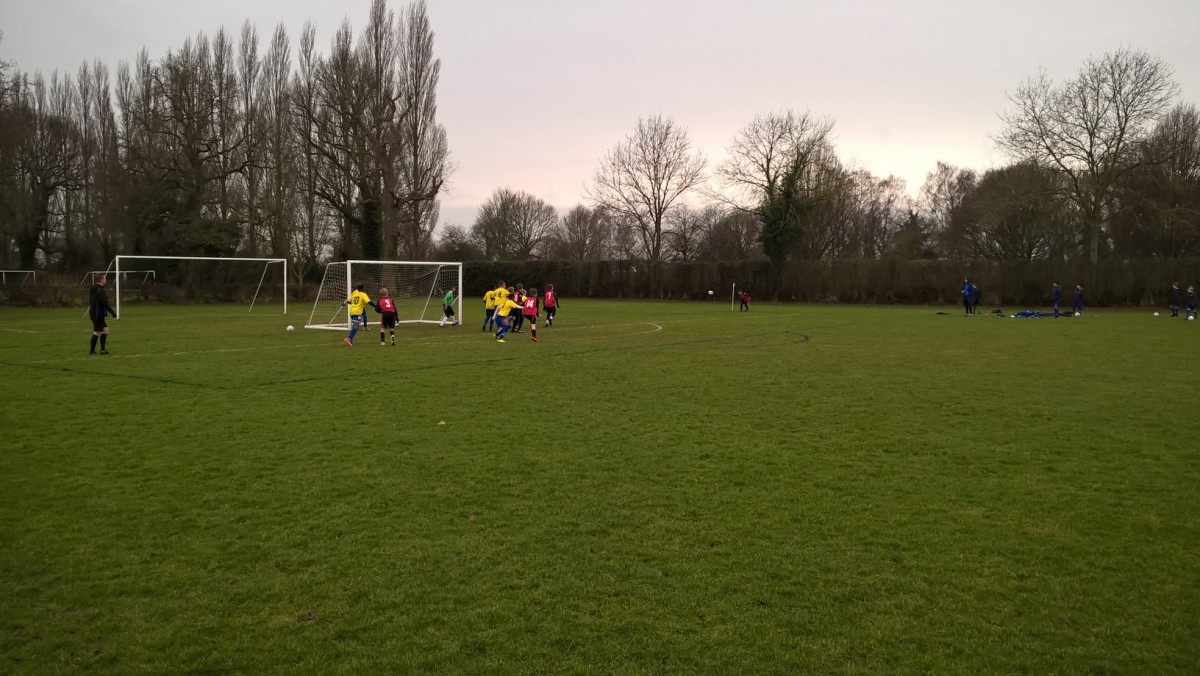 In the week when the big football story of the week was Leeds United’s controversial re-design of their Club Badge, York Schoolboys U12s welcomed their Leeds counterparts to the University of York, for a Michael Dale Trophy 1/4 Final Cup tie.

Leeds, whose shirts proudly sport the City of Leeds Coat of Arms, that was also the original club badge of Leeds United, started this game the brightest and it was not long before York goalkeeper, Henry Jackson, had to scramble a long range shot from a Leeds midfielder around the post for a corner.  Henry had to be at his best about 5 minutes later when a Leeds midfielder hit an excellent 25 yard dipping lob from out on the left, but Henry backpedalled and managed to tip the ball out for a corner.

It was York however who took the lead with their first chance of the game thanks to a cool finish from Ronnie Kelly.  Ronnie hassled a Leeds defender into losing the ball about 30 yards out and the ball broke to Dan Gallagher.  He passed the ball through to Ronnie and he went one-on-one with the keeper and slotted it past him.

After the 20 minutes York threatened again.  York cleared a Leeds corner to Jamie Hudson and he played a great pass into the feet of Ronnie Kelly, just inside his own half.  Ronnie turned his marker, held off another defender and checked inside a third before hitting a great strike from the left hand edge of the box, but unfortunately crashed back out off the foot of the right hand post.  It was a great run and shot, which was reminiscent of ex-West Brom, Coventry City and England striker, Cyrille Regis, at his best.

York made it 2-0 minutes later when Dan Gallagher played the ball inside to Reuben Pugh and he hit the ball first time from 20 yards and it dipped over the Leeds keeper and went in off the underside of the bar.  York could have wrapped the game up soon after when Ronnie Kelly nicked the ball from a Leeds defender near the corner flag and cut in along the dead ball line.  York midfielders were queuing up for a tap in, but Ronnie went for a shot into the far corner that went wide.

York did make it 3-0 soon after when a Paul Iggulden free-kick was spilled by the Leeds goalkeeper and Ronnie Kelly was on hand to tap in.  With 15 minutes left, Ronnie completed his hat-trick.  Liam Mainprize played an excellent first time through ball to Ronnie and he again did the business from close range to make it 4-0.

Leeds had some very good spells of possession as they always looked to get the ball down and pass, but York were thankful for some great cover tackles and interceptions from Ryan Evans.  Similarly, Liam Mainprize was a constant menace to the  Leeds midfield, breaking up play and re-starting York attacks.

York made it 5-0 with 8 minutes left when Will Almond anticipated a wayward cross-field pass and picked out the bottom corner with a fine first time side foot finish.  Leeds grabbed a deserved consolation goal late on when the ball was bundled in at the back post following a Leeds corner.

Man of the Match – Ronnie Kelly.

Ronnie is very much the modern day centre forward in the mould of Harry Kane, who is comfortable leading the line and always looks likely to score.  Ronnie deserved his hat-trick as he was also the first line of defence, constantly harassing the Leeds defenders.