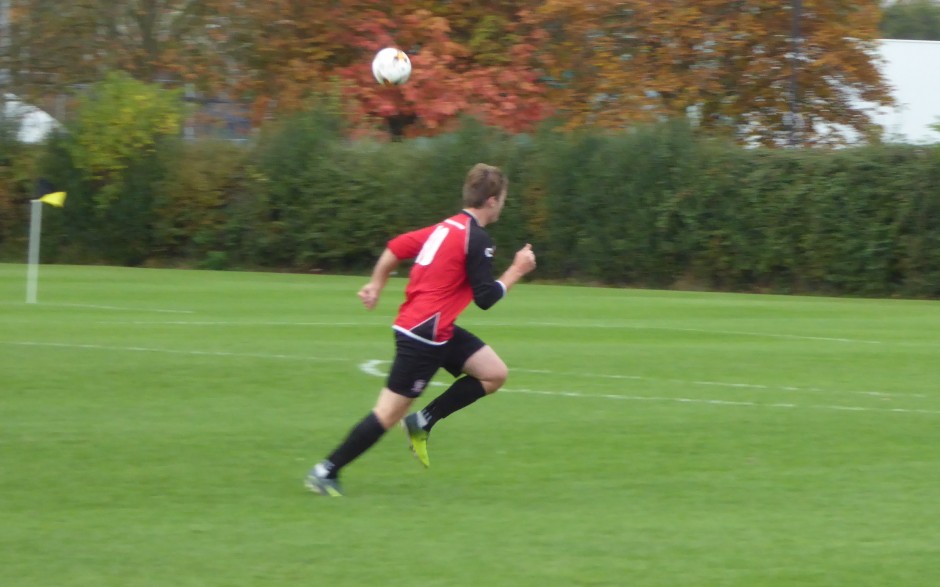 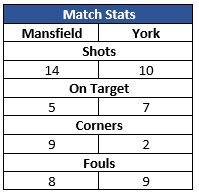 After losing their last game to table toppers Harrogate, York U15s travelled to Mansfield, last years league and cup winners in what was to be a tough game.

With York kicking off, both teams started strongly with Mansfield slightly edging the possession stakes.  It was York who had the first real chance of the game when they were awarded a free kick 35 yards out, viciously taken by Luke Jones which had the hosts keeper diving at full stretch to punch the ball out for a York corner in the 5th minute.  Minutes later another Luke Jones free kick, bent round the wall narrowly sailing over the crossbar had Mansfield on the back foot in the first 5 minutes.

Mansfield started to up their game but the midfield of Elliot Oliver, Liam White, Ben Calam, Max Potter and Luke Jones worked hard to contain Mansfield, with the defensive trio of Sid McCoy, Leo Jones and Roscoe Dawson limiting the Mansfield strikers to long range shots, and those that found the target were safely held by York keeper Joseph Hodge.  Two Mansfield corners in quick succession saw keeper Joseph Hodge push one shot round the post and punch the other to safety as Mansfield looked for the first goal.

The best chance of an exciting first half fell to York as Charlie Fort latched onto a Luke Jones channel ball beating the Mansfield back four and rounding the keeper; but pushing the ball too wide cut it back for the on-rushing Sid McCoy, with the Mansfield shot stopper doing well to recover to save the first time shot.  York went into the break having created the better of the openings with slightly less possession.

Mansfield started the second half forcing York keeper Joseph Hodge into a save in the early minutes.  A Luke Jones shot was again pushed round the post; but York couldn’t make the Ben Calam corner count.  Both teams were battling hard to break the deadlock, with York, now with a back four, keeping Mansfield at arm’s length with Jarvis and Sid McCoy marshalling the Mansfield wingers.

A Liam White free kick from the right flank was safely gathered by the Mansfield keeper as both sides looked to open their account. With the game end to end, Ed Hammond was denied by the keeper as Joseph Hodge kept the score to 0-0 at the other end producing a fine display.

A headed clearance from Ben Fawcett was helped on by Leo Jones and chased down by Ed Hammond, beating the offside trap, was left one on one with the keeper 30 yards out, with Ed managing to get his shot away as he was closed down by the on-rushing Mansfield stopper, with the ball taking a double ricochet flying over the keeper and into an empty net breaking the deadlock in the 67th minute.

As Mansfield pushed for the equaliser, defending higher up the pitch, York hit the channels and wings on the counter attack with Ed Hammond, Charlie Fort and Ben Calam working tirelessly up front.  Charlie Fort latching onto a Luke Jones free kick on the edge of the 18-yard box had the ball stolen off his feet before he could get his shot away from an industrious Mansfield midfielder and was unlucky minutes later as he was inches away from latching onto a cross from the left from Ed Hammond on the six-yard line, with the gaming finishing 0-1 to York.

Managers Comments (Alan Oliver): Well done to all the lads, who played as a team against a strong Mansfield side. Really pleased we have continued on from last weeks second half where we played some great football and continued to be strong. Very impressed of how you won the 50/50 balls. There was a lot of talking and encouraging on the field and we kept our focus and determination.  Let’s take this into next weeks game.

Man of the Match was awarded to Luke Jones.  Very hard to determine as you all played very well but I would pick Luke as man of the match due to his organisation from the back.