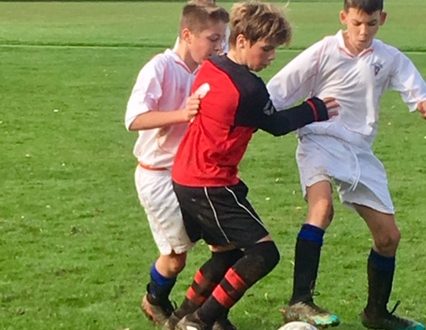 York visited East Riding to play their third league game of the season. Unfortunately, York were caught cold early on and found themselves behind after only 2 minutes when a right wing cross eluded the York defence, allowing the East Riding striker time to score. 1-0.

York came back, creating a number of half chances. Harry Shane forced the keeper into a good save following a York corner before James Rennocks dribbled through the defence to equalise with a low drive. Rennocks then struck the crossbar before an East Riding attack led to a great block and double save from goalkeeper, Jacob Bryant.

The game was end-to-end at this stage, both sides pushing forward to take the game to their opponents. East Riding tested the York defence of Billy Hobson, Jack Redman and Shane, who worked well together and showed strength and awareness to reduce the number of clear chances created against their team.

York took the lead on the 20 minute mark, Arthur Jefferson Hallett showing great footwork to send his marker one way, then the other and then fired a superb right-footed shot to the keeper’s right. East Riding maintained the pressure, Bryant in the York goal saving bravely at the forward’s feet. York finished the half strongly, though as Rennocks shot narrowly wide before Ben Armitage set up a chance for Alex Widdup, who just missed the target. 2-1 to York at half time.

East Riding caught York out shortly into the second half, winning the ball on the half way line to break quickly and equalise at the second attempt – York keeper Jack Yates, on at half time for Bryant, doing well to get a hand to the ball before the opposition tapped home. 2-2.

At this point, York raised the quality of their game and began to play some good football. Harry Fort and Kiam Browne getting on the ball a bit more in midfield to play the ball out wide and into the forwards. This helped open up opportunities for York.

On 40 minutes, Ben Armitage played a good ball into Jefferson Hallett, his deep, accurate cross headed home bravely at the far post by Rennocks. Two minutes later, York extended their lead, Rennocks this time providing a chance for Jefferson Hallett, who slotted home. East Riding were still in the game, though. A move down their left and a near post volley led to Yates pulling off a smart save as he turned the ball away for a corner.

York, however, really pushed home their advantage in the final ten minutes, cutting through their opponents on a number of occasions to create further chances. Rennocks played in Browne, who coolly slotted home to make it 5-2. Widdup was then played in, running from the half-way line before cheekily chipping the ball over the advancing goalkeeper to wrap up the scoring and make the final score 6-2 to York.