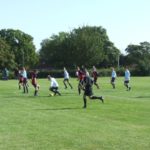 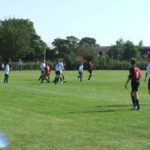 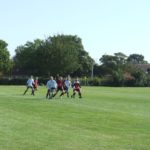 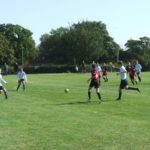 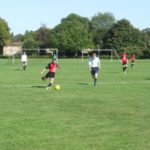 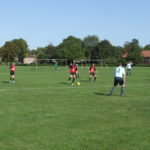 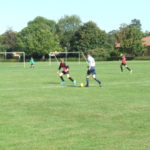 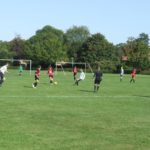 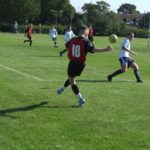 A bright energetic start from York saw them create the first chance as Will Hotson’s cross from left field bounced dangerously across the six-yard box with nobody on hand to apply the finishing touch.  Already the team looked more balanced and used both flanks at every opportunity to put pressure on the visitors back four.

Spen’s reaction was swift as they continuingly looked to hit the home side on the counterattack, going close with a shot just over the bar.  On the rare occasions that Spen threatened, the York back line stood strong and quickly worked the ball up field putting further pressure on the visitors.

The next chance fell to Ollie Swift who went through one on one, but his shot was well saved by the Spen keeper.  York’s central midfield pairing of George Harrison & Ellis Cattaneo worked tirelessly to break up play and provide the pivot for the home sides attacking play.  The York right edge was working well and another good cross from Mathew Dawes fell to Frankie Cresswell who’s lobbed effort went inches over the bar.

With only seconds remaining of the first half a long throw down the Spen left caught York napping. As the striker broke into space and looked to pull the ball across the area, he shined his kick and the ball flew inside the near post to level things up.  A disappointing end to the first half for York who had been much the better side.

The game was still there for either team to win but it was just a case of who tired first in the increasingly hot conditions.  The first chance of the second half went to the visitors as a goal bound effort from a corner was somehow cleared off the line in a mad scramble.  York then quickly broke up field with Adam Oxer Frankie Cresswell & Mathew Dawes linking well down the right before the resulting cross was handled in the area, with the referee pointing to the spot.  Mathew Dawes stepped up and thumped home the penalty to put York back in front.

The home side pressed home the advantage with some excellent football in a dominant period soon after.  Firstly, it was Joe Sidebottom who got on the end of a through ball to finish superbly to give York breathing space.  He completed his hat-trick two minutes later as a bouncing clearance was misjudged by the visitors centre half, and he kept his nerve under pressure from the full backs to smash the fourth into the top corner.

The home side now looked comfortable but a speculative long ball out of defence fell to the visitor’s striker who finished well to pull one back.  The game was now very stretched as both teams pushed for the next goal.  A break down the right for York, involving a lovely one-two, created an overlap for Adam Oxer to pull his cross back and find Joe Sidebottom who added his fourth to cap an impressive display.

Further chances followed as the visitors ran out of steam with Cole Gayles going close with a header, Ollie Swift forcing another save out of the Spen keeper before hitting the bar in the closing minutes.  The whistle went on a thoroughly entertaining game with both teams showing great energy & desire throughout despite the draining heat.