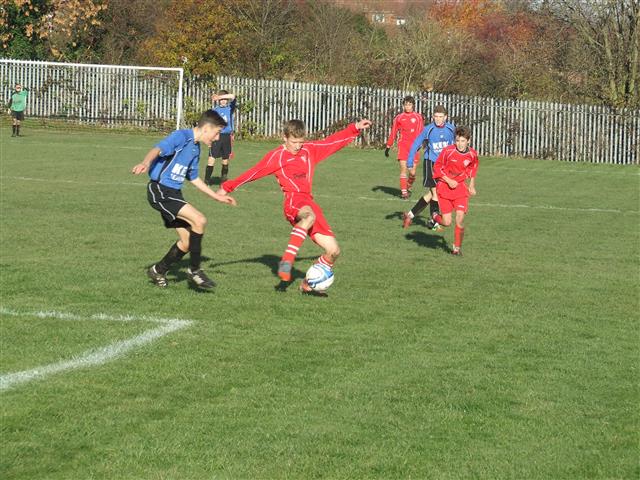 York Schoolboys unbeaten run continued to 4 matches with a combative 1-1 draw away to Barnsley in their recent league game.

York quickly settled into the game creating the first opportunity, when Joe Kilvington headed just wide from a corner, and they continued to keep a tight hold on the game, with a Lawrence shot and a disallowed Eddie Greening goal for off side. With the York team quickly closing down play the home side were finding it difficult to break free, with York  putting on further pressure without creating any clear cut chances. It was Barnsley who then brought out a terrific save from York ‘keeper Adam Precious who pushed onto the bar a rising shot. With Man of the Match David Barber well marshalling the York defence, any further attacks were quickly snuffed out. Just before half time, a 2nd York goal was disallowed again for off-side, this not so clear cut when a Zac Lawrence free kick was pushed away by the home ‘keeper,  Joe Kemp forced the ball home after it was played back to him, only to see the referee disallow the goal.

It was again York who created the first chance of the 2nd half, when an Alex McMillan shot was saved, a further Lawrence shot and Davison chance inches wide after good work out wide from Tweddle and Owen Marshall. Barnsley now started to gain a foothold in the game and gain some momentum putting pressure on the York defence and they went 1-0 up when after a York clearance the ball was quickly returned into the box for a 15 yard shot to find its way into the York net. Over the course of the game it was against the run of play, and with time now running out York got the ball forward quickly for Greenhill to out pace the Barnsley defence and slot past the advancing ‘keeper, to make the final score 1-1. York next league game is at home to Scarbourgh.